"Sweat" at the Guthrie Theater 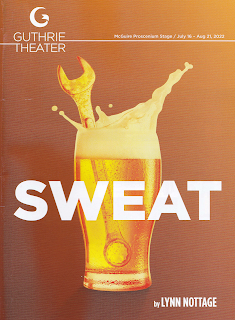 Three years ago, the Guthrie premiered the new play Floyd's (which had its Broadway premiere as Clyde's earlier this past season) by two-time Pulitzer Prize winning playwright Lynn Nottage, a companion piece to one of her Pulitzer Prize winners, Sweat. The Guthrie was supposed to produce that play in the summer of 2020, which of course it didn't, but good things come to those who wait. Both plays were created based on an extensive series of interviews by Lynn and Kate Whoriskey (frequent collaborator and original director of both plays) with the people of Reading, Pennsylvania. The 2010 census determined that Reading had the highest poverty rate out of all cities in America with a population over 65,000, making it a microcosm of what was happening in the greater U.S. during the recession. The first play to come out of these interviews, Sweat is a grittily real, painfully American, and beautifully human story of a group of friends whose lives are torn apart by poverty, drug abuse, racism, and violence.
The play begins in 2008, with a parole officer meeting separately with two young men recently released from prison. We then flash back to 2000 and the events leading up to the "incident" that landed both men, who were at one time best friends, in jail. All of the action takes place in a neighborhood bar that's also a community hangout, with friends and coworkers from the local factory gathering after work - celebrating birthdays, getting into fights with exes, reminiscing about their past, and dreaming about their future. Between scenes news tickers run across the stage, about local events, the upcoming election, and increasingly bad news about the economy (sound familiar?). Our friends are personally affected when the plant begins to cut jobs, moving them overseas or offering them to non-union workers, and one of the friends gets promoted above the others. Tensions build to the boiling point, resulting in a shocking moment of violence that forever changes the lives of everyone involved.
Director Tamilla Woodard, new to the Guthrie stage, creates a very natural and real feeling throughout the play, balancing moments of humor with the darker events. The entire cast, mostly non-local, are absolutely fantastic as they embody these very specific humans that feel like real people rather than caricatures. The cast includes Terry Bell and Noah Plomgren as the two very different young men Chris and Jason, the former with bigger dreams, the latter satisfied to remain in the same job and town; Mary Bacon, Lynnette R. Freeman, and Amy Staats as the three friends whom circumstances drive apart; and locals Ansa Akyea as Chris' down-on-his-luck dad, a perfectly cast Terry Hempleman as the bartender/counselor, Antonio Rios-Luna as a bar employee, and Darius Dotch as the parole officer.
The bar set looks every bit the cozy but slightly run-down local hangout, complete with bar stools, beer signs, and a working tap (pour me one, Terry Hempleman!). What looks like a steel door on a garage or factory is lowered in front of the set to create space for other scenes, while images and words depicting current (in the aughts) news stories are projected onto various surfaces. Characters are dressed in working class factory attire, with a bit of sparkle on the nights out, and an upgrade in wardrobe upon promotion. And the aforementioned fight scene is terrifyingly realistic, even, or especially, from the front row. (Scenic design by Mikiko Suzuki MacAdams, projection design by Katherine Freer, costume design by Sarita Fellows, fight direction by Aaron Preusse).
After its 2017 Broadway run, Sweat toured the country, playing in towns like Reading, including here in Minnesota. The economic and political situation in this country, currently and over the last 20 years, is extremely complicated. Lynn Nottage's Reading plays attempt to, maybe not explain it, but provide context and empathy about how peoples lives have changed and the desperation that can ensue. As I've written before, Sweat is "as devastating as it is true to American life."
It felt great to be at the Guthrie with two brilliant but very different shows running at the same time (Sweat in the proscenium theater, Kate Hamill's delightful world premiere adaptation of Emma on the thrust stage). They were even selling limited concessions for the first time this year. The Guthrie Theater is my happy place, and it's starting to feel almost back to normal, with that feeling of excitement in the art and artists. Both plays are continuing through August 21, and are both definitely worth experiencing.