Broadway Tour of "Wicked" at the Orpheum Theatre 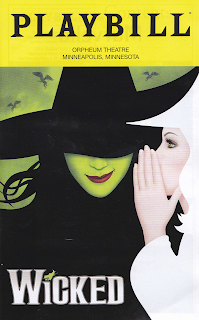 No matter how many times I see Wicked (seven and counting), it's always a thrill. Those familiar and iconic moments (Glinda descending in a bubble, Elphaba ascending on her broomstick declaring "You'll never bring me down," the flying monkeys) still have power. At this point, the fourth longest currently running Broadway show (since 2003), that has been touring the world almost as long, is a machine that runs like clockwork. But this incredible touring cast, despite how many times they may have played these roles and sung these songs, find a way to make it feel fresh, exciting, and still surprising. Oz will stay in Minneapolis for a month, and whether you've never seen it (who are you?) or have seen it a dozen times, it's always a great time to experience the spectacle, the thrill, the iconic score, and the heart-warming story of female friendship and standing up for what's right. Click here for info and tickets, including info about student/educator rush tickets.
In case you've been living under a musical theater rock for the last nearly 20 years, here's a brief plot summary. Wicked is based on the book of the same name by Gregory Maguire, which is a re-imagining of The Wizard of Oz by L. Frank Baum. In this new mythology, before Dorothy and her house land in Oz, Glinda the good witch and Elphaba the wicked witch are two young women who find themselves roommates at school and become unlikely friends and allies. All is not right in the land of Oz; human-like Animals are seeing their rights and voices taken away. Elphaba discovers that the Wizard is behind all of this, and becomes a fugitive as she works against him to free the Animals. Glinda is seemingly on the Wizard's side, but the two never lose their connection, despite both loving the same man. The romance is compelling but it is refreshingly not the focus of the show; Wicked is really about the friendship between these two very different women and each of them discovering who they are, and helping each other in that discovery ("Because I knew you, I have been changed for good"). Anyone who's ever felt like an outcast in any situation can relate to Elphaba; she's a wonderful inspiration, especially for girls to grow up as strong women ("I'm through accepting limits, 'cause someone says they're so. Some things I cannot change but 'til I try I'll never know"). Wicked explores the ideas of good and wicked ("are people born wicked, or do they have wickedness thrust upon them?") and the fact that in real life (and sometimes in musicals) it's never as simple as good and wicked, there's a lot of room in between where most of us live. Like Fiyero, Wicked is much deeper than its beautiful exterior might imply.*
Maybe it's my faulty memory, but this may be one of the best Wicked casts I've seen. Jennafer
Newberry is an absolute delight as Glinda, possessing a gorgeous soprano voice that she's also skilled in using for comedic effect, personalizing the iconic role with lots of cute little tics and squeals. Lissa Deguzman is equally strong as Elphaba - awkward, funny, vulnerable, strong, and a serious belter. Glinda and Elphaba is the central relationship of the show, and these two are so believable as friends, with a prickly but warm chemistry.
The supporting and large ensemble cast are also incredibly talented. Jordan Litz is tall, dark, and charming as Fiyero, with the voice, charisma, and jaw line of a god. Lisa Howard is a devilish Madame Morrible we love to hate, and John Bolton as the Wizard is every bit the alluring huckster, spouting lines that hit a little too close to home, e.g., "where I'm from we believe in all sorts of things that aren't true, we call it history." Finally, #TCTheater goers may recognize Elphie's sister Nessarose, the seemingly good one with some wickedness of her own; she's the lovely and talented Kimberly Immanuel from the Ordway's production of 42nd Street.
If you have time at intermission after waiting in the super long but surprisingly efficient bathroom line, check out the pit, that holds 14 musicians, two-thirds of them local, playing nearly twice as many different instruments (if only I hadn't given up the clarinet). Stephen Schwartz's endlessly singable score sounds amazing in the hands of these musicians (under conductor Evan Roider, whose sure hands you can see popping out of the pit guiding the performers). Combined with the harmonizing and soloizing (I can make up words too) from the uber talented cast, they create a full rich sound that's a joy to listen to.
In addition to being a feast for the ears and the soul, Wicked is also a feast for the eyes. The Tony-winning scenic and costume design (by Eugene Lee and Susan Hilferty, respectively) supply one delight after another. The prep school costumes, the black and white party attire, the over-the-top green of the Ozians, the flying monkeys and other creatures, are all thrilling. The gears and clockwork in the set design, the massive dragon perched above the proscenium, the mechanical Wizard head, the colorful gardens of Munchkinland, never cease to amaze. The original direction by Joe Mantello and musical staging (aka choroegraphy) by Wayne Cilento is flawlessly executed by this team, smoothly and seamlessly moving from one scene to the next, with both fun dance numbers and more subtle movement.
Wicked is the rare phenomenon of a musical that lives up to the hype. Yes, it's a spectacle with showy sets and costumes, but it also has a ton of heart, a clever and catchy score, and an inspiring message. And nearly 20 years later, they're still finding new talent to fill these iconic roles and make them their own. That's what makes Wicked worthy of repeat (and repeat, and repeat) viewing.
Wicked continues at the Orpheum Theatre in downtown Minneapolis through August 28.
*Plot summary borrowed from a previous review.