"Something Rotten" at Lyric Arts 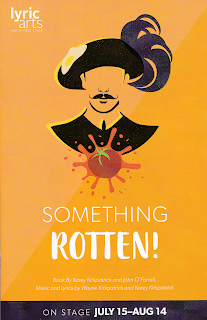 Once again, Lyric Arts in Anoka is bringing us the regional premiere of a new(ish) Broadway musical (see also 2018's If/Then and 2019's Bright Star). The 2015 ten-time Tony nominated Something Rotten! is a hilarious musical about musicals, set in Shakespeare's time and featuring The Bard himself as a character. Lyric Arts has assembled a huge, talented, and largely unknown cast to bring this big, bold, wacky story to life on their intimate stage, and it's a hit. If you love musicals, or Shakespeare, or Renn Fest, or broad comedy that's both silly and clever, this is the show for you. Click here for more details and to purchase tickets to the show (continuing through August 14).

Something Rotten! is a broad campy comedy about the making of a musical, similar in feel to The Producers and Spamalot. The musical-within-a-musical concept allows the creators to satirize the form while still remaining true to it. Our story takes place in the late 16th Century ("Welcome to the Renaissance"), the blossoming of art and culture, as well as toilets that flush (into the street). Playwright Nick Bottom needs a hit, but Shakespeare is hogging all the glory. So Nick pays a soothsayer to tell him what the next big thing is theater is going to be, and this Nostradamus sees Shakespeare's greatest work Hamlet, as well as the birth of musical theater. Except that he gets things a bit jumbled (fortelling the future isn't an exact science), so what Nick ends up writing, with the help of his sweet lovesick poet brother Nigel, is a mash-up of Hamlet and popular musicals from Annie to Phantom. Which is great fun for the Something Rotten! audience, but not so much for the Omelette: The Musical audience and investors. Or Shakespeare, who dons a disguise (like many of his characters) to sabotage the play. But as the Bard says, all's well that ends well, and in this case that means the Bottoms head to America, where musical theater is truly born.*

Director Scott Ford gets great work out of the 21-person cast, who all gamely jump into the campiness with both feet. The show never stops rolling through all of the gags, double entendres, songs, and dances. Kyler Chase is great as Nick, playing him as exasperated and just on the verge of a breakdown. The role of Nigel was played by an understudy when I saw the show, a sweet and sincere Alex Stokes like a calm amidst the wacky storm. Twin Cities Theater Bloggers' favorite musical performer of 2019, Becca Hart, hams it up in the best way as Nick's wife Bea, who ironically doesn't have much to do in the show (despite singing about it in "Right Hand Man"). Courtney Vonvett pulls some great comedic faces as Nigel's preacher's daughter love interest, and Justin Betancourt steals scenes as the not entirely accurate soothsayer Nostradamus. Lastly, it may be "Hard to Be the Bard," but Carl Swanson makes it look easy as the ever smooth and cool rock star Shakespeare. Everyone in the hard-working ensemble, led by the minstrel Kiko Laureano (a role often played by a man BTW), is playful and present.Anna Murphy leads the off-stage eight-person band on this clever and catchy score (the song "A Musical" is so full of musical theater references it could be a trivia game). Hannah Weinberg-Goerger's choreography is fast, fun, and never ceasing, a mix of styles throughout the centuries (including tapping and flossing). Characters are dressed in colorful Renn Fest type costumes (designed by Caitlin Quinn), set against a two-dimensional cartoonish Renaissance cityscape, with pieces that open to other locations (scenic design by Peter Lerohl). Everything about the show is consistent in the period yet ultra modern feel (similar to shows like The Great).

There truly is "nothing as amazing as a musical, with song and dance and sweet romance and happy ending happening by happenstance." It's pretty bold for musical theater creators to include the lyric "must see magical new original musical" in their show, but in the case of the Kirkpatrick brothers and their creation Something Rotten!, it's true. The talented team at Lyric Arts in the suburbs of #TCTheater are the first ones to tackle it, with a production that's full of so much heart and humor. See it now through August 14.

*Plot summary borrowed from what I wrote about the Broadway production in 2015.