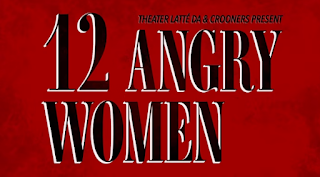 Theater Latte Da is just over halfway through their seven-week run of the world premiere new musical adaptation of Twelve Angry Men, the classic American rumination on justice and civil discourse. If you haven't seen it yet, get your tickets before they're gone (read my full review of this "adaptation done right" here). Last week, #TCTheater artist and musical theater history aficionado Max Wojtanowicz presented one of his "Pin Spot Series" edutainment shows about the making of this musical in particular, and what goes into making a new musical in general (watch for more of this series during Latte Da's upcoming 25th season). And this weekend only, Theater Latte Da is presenting a companion cabaret show at Crooners entitled Twelve Angry Women, compensating for the fact that the author's estate did not allow them to change the gender of the characters. Although it was planned months ago, this show couldn't come at a better time; women have arguably never had more reason to be angry than they do now, when the Supreme Courts is rolling back our rights 50 years. This show is both a healthy release of that anger, and a beacon of hope that we're still here, we're still fighting, and we'll get through this together. Get your tickets for one of the two remaining shows here.

This piece was curated by three women who work with Theater Latte Da - Co-Founder and frequent Music Director (including of Twelve Angry Men) Denise Prosek; Associate Artistic Director, Director of Impact, and frequent choreographer (including of Twelve Angry Men) Kelli Foster Warder; and Associate Artistic Director and Director of New Work Elissa Adams. Along with piano accompanist Mindy Eschedor and eight uber talented singers, they comprise the titular 12 women. The women take turns singing a few solos each, plus some duets and group numbers, closing with one of the best musical theater female empowerment songs, "Defying Gravity" from Wicked (coming to Minneapolis later this month!).

Performers and select highlights include:

In dark times, I always look to the artists, to hold up a mirror to reflect our world, and to show us a way to make it better. These Twelve Angry Women have done that in an entertaining and inspiring show. See it tonight or tomorrow only!