The Jungle Theater Presents "King Gilgamesh & the Man of the Wild" 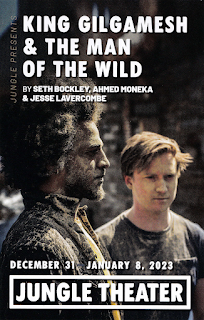 I don't know why someone would decide to premiere a new work of theater for a week in early January in Minnesota, but those of us who attended one of the seven performances during and after the biggest snowstorm of the season are lucky that the creators of King Gilgamesh & The Man of the Wild did just that. Seth Bockley, Ahmed Moneka, and Jesse LaVercombe (the latter familiar to Jungle audience from his performances in the beloved Christmas at Pemberley plays) have developed this work the last five years, with several workshops, some in Minnesota, and are debuting the finished product at the Jungle as part of their "Jungle Presents" series, in a nearly sold-out run. Next, they're taking it to the Under the Radar Festival in NYC, and who knows where beyond that. This mash-up of one of the oldest stories ever told with the creators' real-life stories is beautifully told, with music and movement, in a thoughtful, polished, funny, moving, and life-affirming way.

The Epic of Gilgamesh (the oldest surviving piece of literature) is told within the story of Ahmed and Jesse, two actors from other countries (one a refugee from Baghdad, the other from Minnesota) who meet in Toronto when both are on the cusp of a big life event (birth of a child, potentially career-changing movie role). They bond over a magic mushroom, and morph back and forth from themselves to Gilgamesh and his friend, the wild man Enkidu. We follow the two parallel stories several millennia apart, a story of friendship and of grappling with the existential ideas of life and death.

Both actors give wonderfully believable performances, both as the slightly fictionalized versions of themselves and as these ancient archetypal characters, and the bond between them is palpable. They're accompanied by a fantastic five-piece band led by Music Director Demetrios Petsalakis, both with songs that the actors take part in, and an almost constant underscoring. Most of the musicians are immigrants from the Middle East to Canada, and provide a sound that's authentic to the region where both Ahmed and Gilgamesh are from, with an eclectic mix of instruments (including an incredible clarinetist). The show opens and closes with a song led by Ahmed, including an encore, making it feel almost like a concert experience, with some storytelling in the middle. With a brick wall as a backdrop and several large plants, the Jungle stage is sparsely populated with just a wooden table and a few chairs, plus a piano (that Jesse plays), of which you can see the inner workings. The band is lined up at the back of the stage, in full view the entire show. Lighting changes (including from two chandeliers) create dramatic effects, and actors are miked to be heard above the music, with a nice sound mix in the Jungle's intimate space. (Production design by Lorenzo Savoini, sound desigh by Adrian Shepherd-Gawinski, lighting design by Jon Brophy.)

One of the best parts of #TCTheater is the incredible amount of new work that's created here. And while it's not an entirely local production, King Gilgamesh & The Man of the Wild does have some roots in #TCTheater and was partly developed here. I'm so glad they brought the finished product to us, a really inventive piece of music-theater-storytelling that's as epic and ancient as it is modern and relatable. There's a reason this old story continues to be told, and the creators have done a wonderful job of showing us why and tying its themes to today's world and our own life experiences. This was my first show of 2023, and it's a promising start to another great year of theater.