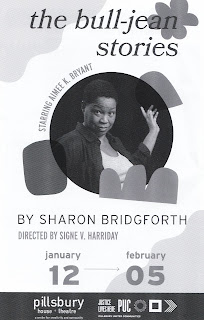 This year, Pillsbury House Theatre is presenting the work of playwright and author Sharon Bridgforth, whose work Dat Black Mermaid Man Lady / The Show they produced in 2018, about which I wrote "It's a piece that defies explanation, that maybe shouldn't be explained, but rather experienced." Their current production the bull-jean stories, to be followed by bull-jean/we wake this summer, is a little like that. The amazing Aimee K. Bryant plays a dozen or more characters, all telling stories about a woman known as bull-jean, or bulldog-jean, in a lyrical and non-linear way. It's really beautiful, moving, and almost dreamlike storytelling (continuing through February 5).
In just about an hour, Aimee K. Bryant physically, emotionally, and vocally inhabits a wide range of characters who make up the universe of the bull-jean stories, which Wikipedia describes thusly: "the bull-jean stories give cultural documentation and social commentary on African-American herstory and survival. Set in the rural South of the 1920s through the 1940s, the bull-jean stories uses traditional storytelling and nontraditional verse to chronicle the course of love returning in the lifetimes of one woman-loving-woman named bull-dog-jean." Aimee is bull-jean herself, the women she loved (and mostly lost), friends, neighbors, and family. She's completely convincing as all of these very different characters, funny and natural, heart-breaking and real. Rather than a factual life story, we get a clear impression of who bull-jean is - a woman who loves fiercely and whole-heartedly, even if she isn't always rewarded for it.
Aimee uses all of her talents in this show, including a bit of singing, and playing the banjolele (a new instrument for me - a combination of a banjo and ukulele). There is also movement and creative use of props, including the recurring image of a ladder. She uses the entire wide Pillsbury stage, with a porch on one end, rocking chair on the other, with various implements and objects hung from the ceiling. Subtle changes to her period costume, consisting of pants, white shirt, and vest, add interest, and lighting effects enhance the storytelling and signal when one story ends and the next begins. Scenes flow smoothly from one to the next under the direction of Signe V. Harriday, with a nice balance between lighter and heavier moments. (Scenic design by Mina Kinukawa, lighting design by Tom Mays, composition and sound design by Dameun Strange, props design by Abbee Warmboe, costume design by Amber Brown).
the bull-jean stories is a beautifully lyrical look at love and resilience through the lens of a Southern Black lesbian woman in the early 20th century, with an impressive performance by #TCTheater favorite Aimee K. Bryant. See it a Pillsbury House Theatre in South Minneapolis through February 5.