"The Belle of Amherst" at The Woman's Club of Minneapolis 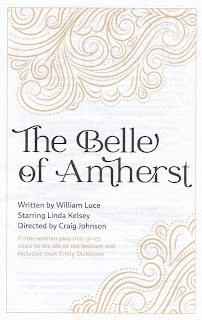 The Woman's Club of Minneapolis has been around since 1907, and they've been in their current home since 1928 - the big beautiful building adjacent to Loring Park, which was recently placed on the National Register of Historic Places. I saw a handful of shows there pre-pan (including Minnesota Fringe Festival shows, a Skylark Opera Theatre production, and that time I met Gavin Creel). I'm excited about their ongoing Arts and Culture program, which includes concerts and, hopefully, more theater events. A limited engagement of the solo play The Belle of Amherst, starring TV/film/theater actor Linda Kelsey, was there last weekend. There is a 600-seat theater on the lower level (where I saw Nickel Creek perform over 20 years ago), but the upstairs lounge area is a great performance space too (that's where Sue Scott's podcast Island of Discarded Women records live once a month or so). This play was in that space, which was just the perfect location for this story of Emily Dickinson's life and poetry. Unfortunately the short run is over (and sold out or very nearly), but keep an eye on The Woman's Club for upcoming events.
I'm sorry to admit that I didn't know much about Emily Dickinson or her work before seeing this play; I'm not much of a poetry reader. As we learn in The Belle of Amherst, Emily spent much of her life in seclusion in her family home in Amherst, Massachusetts. She wrote thousands of poems, but only a handful were published in her lifetime. She became well-known as a poet only after her death. In this play, Emily (embodied by Linda Kelsey) speaks directly to the audience, as if we're visitors in her home. She tells us stories from her life, from her childhood spent with an older brother and younger sister, to her adulthood spent writing poetry and correspondence, to the death of her parents in her older years. Playwright William Luce took much of the dialogue from Emily's writing, including some of her poems, which I now know are quite beautiful and succinct, and capture the emotions of her subject matter perfectly.
TV/film/theater veteran Linda Kelsey (you may recognize her for her Emmy-nominated role in Lou Grant, or any number of TV and film appearances) is an absolute delight as Emily. She's animated and engaging, enthusiastic as Emily discusses her work and emotional as Emily discusses her losses. She talks not only to us as her visitors, but also to family, friends, and acquaintances. We only hear Emily's side of the conversation, but we can intuit what the other side of the conversation is by Linda's reactions and facial expressions in the pauses. Directed by Craig Johnson, we travel clearly and more or less linearly through Emily's life, with a mostly light-hearted tone, but with moments of poignancy as Emily reaches the end of her life and career.
The 1928 building is a perfect backdrop for this story, if a few decades after Emily's death. A small stage is set up at the far end of the room in front of the fireplace (with real flames). An area rug and a few period pieces of furniture make up Emily's room, with the all important photos of her family that she proudly shows to us. Linda wears a lovely white dress of the era, in Emily's favorite white, with hair parted down the center and gathered in a neat bun (costume design by Rich Hamson, wig design by Andrea Moriarty). As I said I didn't really have any previous impressions of Emily Dickinson, but with the design and Linda's performance, it all feels authentic and it's quite easy to be transported into Emily's world.
You can find out about the Arts and Culture program at The Woman's Club of Minneapolis by following their Facebook page or checking the event page on their website. They also support many local charities and community outreach programs, read more about that here.