"The Girl on the Train" at Lyric Arts 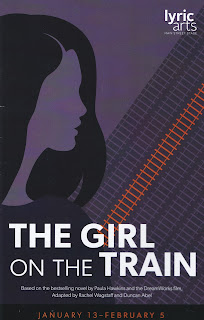 Several years ago, everyone was reading The Girl on the Train. The hugely successful psychological thriller was published in 2015 and has sold over 20 million copies. It was soon followed by a movie adaptation starring Emily Blunt, in 2016. But did you know that it was also adapted into a stage play? I didn't either, until Lyric Arts announced it as part of their 2022-2023 season. I wasn't sure if the trippy story filled with memories, flashbacks, and hallucinations would translate to the stage, but with some impressive technical elements employed by Lyric Arts, it does. A great cast, a suspenseful story (especially if you've never read the book or have forgotten the ending, like I had), and a tight interplay between recorded scenes and live performances make for an entertaining night (or afternoon) at the theater. Get some popcorn at the concession stand, and it's even better than going to the movies (continuing through February 5).
The titular girl on the train is a divorced, unemployed, alcoholic woman named Rachel. Every day she takes the train into London (despite being set in England the play is performed with no accents, which seems a bit odd at times, but you soon forget about it) past the home she used to share with her husband Tom, who now lives there with his new wife Anna and their baby. A few doors down from Tom's place, she sees a woman on her terrace who seems to live the perfect life that Rachel has always dreamed about. The play begins when this woman, Megan, goes missing, and Rachel is somehow involved. The problem is, she can't remember how. She becomes obsessed with finding out what happened to Megan, even visiting Megan's husband and therapist to try to get some answers. Eventually all of the pieces fall into place and the answer becomes startlingly clear.
The character of Megan is seen only through the memories of others, as depicted in recorded scenes projected onto multiple screens on stage. First of all, Ninchai Nok-Chiclana gives a beautifully nuanced and heart-breaking performance in these scenes and is a huge part of the success of the play, despite not actually being there. Secondly, the way that the actors on stage interact with the recorded scenes, as if in conversation, is very impressive and feels natural. Thirdly, the way that the scenes are filmed, with different parts of the image displayed on different screens (a close-up of Megan's hands on one screen, her face on another, her torso on another), contributes to the mysterious and fractured feeling of this story. Lights flash when Rachel has a memory, and sometimes she's watching scenes from behind a screen, so that you can see both at once. The technical elements of the production really aid in the storytelling and make it almost like a film/theater hybrid.
The on-stage cast is strong too, particularly Laura Baker in a raw and unfiltered performance as Rachel.
Laura brings out the humanity of the character so that despite Rachel's questionable choices, we still empathize with her and root for her to get her life together. The cast also includes Jonathan Feld as Tom, Grace Hillmyer as Anna, Jack Bonko as Megan's husband, Austin Moores as her therapist, and Doc Woods as a detective, bringing in a bit of humor to the dark story. Director Anna J. Crace does well with the tricky story that goes from present to past, from memory to reality. The sparse, modern, and angular set doesn't detract from the filmed elements but provides a nice backdrop for the story. (Lighting and projection design by Ian Pirner, videography by Jim Eischen, scenic design by Chad Van Kekerix.)
The Girl on the Train is a thrilling mystery, but it also delves into deeper issues of gaslighting, coercive control, relationships, pregnancy and infertility, and the tricks one's memory can play. Maybe that's why this story was and continues to be so popular in all its forms - novel, movie, and now stage play.
See The Girl on the Train at Lyric Arts in Anoka Thursdays through Sundays until February 5.
----------------------------------------
Join me and my fellow Twin Cities Theater Bloggers for a special event at Chanhassen Dinner Theatres! Get $20 off the ticket price for the March 4 matinee performance of the regional premiere of the super fun and heart-warming musical THE PROM, and stick around after the show for a talk-back with some of the cast. Find more info in the Facebook event here, and purchase discount tickets using code TCTB1 or by clicking on this link (discount valid for March 4 1pm performance only). 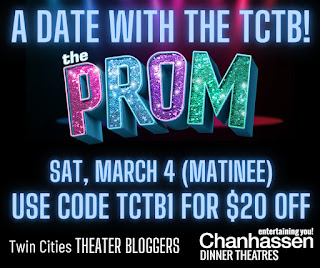