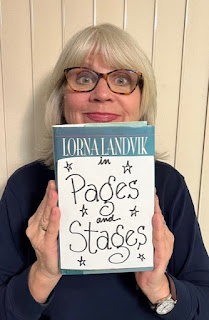 I navigated road closures, the poorly plowed streets of Uptown, and parking challenges to see local author/performer Lorna Landvik's new show Pages and Stages at Bryant Lake Bowl last night. And it was worth it, because the release of laughing (and singing) with a group of people is a great way to enter the new year. Lorna has started off many a year with her show Party in the Rec Room at Bryant Lake Bowl, and this show is similar (but without the margaritas made on stage). Combining storytelling, improv, singalongs, and discussions of her books, Lorna entertains the crowd for 90 minutes. But more than that, she makes us feel part of the event. She's so personable and naturally funny, and very Minnesotan (despite her time spent in L.A., of which she has many great stories). She chats with the audience in a non-threatening way (but maybe don't sit in the front row if you don't want to be asked questions), asks for improv suggestions, and really makes an effort to reach out to everyone in BLB's little theater (even adjusting her mike when people in the back said they couldn't hear her). If you're a fan of her books, or of Party in the Rec Room, or just need a night of fun and congenial laughter, go see Lorna any Friday or Saturday in January.
The show opens with a clip from the gameshow Password Plus circa 1980, with none other than Lorna Landvik from Minneapolis as one of the contestants. For someone who grew up on game shows of this era, it's so much fun to see this old clip, and even more to hear the story behind it. When Lorna went out to Hollywood with plans of becoming a stand-up comic and eventually, a movie star, being a contestant on game shows was one of the ways into the biz (it worked for Kirstie Allie!). Stories of her time in Hollywood (like working at the Playboy Mansion and going to a Halloween party full of celebrities) are interspersed with improvised scenes based on audience prompts. She even tries out that old cliche, "she's so funny I'd watch her read the phone book" (turns out it's true). Every now and then Lorna decides it's time for a singalong, because who doesn't love a singalong?! Old standbys like "Home on the Range," "You are My Sunshine," and Leonard Cohen's "Hallelujah" (through which we stumbled because no one really knew the words), with Lorna playing the ukulele. In the one true audience participation moment of the night, she invited a volunteer up on stage to perform a scene from the intense play Wit, with Lorna improvising her lines (not the easiest play to do that with, but Lorna is up to the challenge).
An evening with Lorna Landvik feels like hanging out with friends or family, if your friends or family were really funny and talented storytellers/entertainers/comedians. A fun, casual evening of togetherness, laughter, singing, and general silliness was exactly what the doctor ordered for me last night.
Lorna Landvik Presents "Pages and Stages" plays every Friday and Saturday at 7pm at Bryant Lake Bowl, with doors opening at 6pm for dinner and drink service, which continues throughout the show. You can also enjoy Lorna's specific brand of Minnesota humor in her 13 novels, the newest of which is Last Circle of Love, about a church circle that writes what they think is a book of erotica to raise money for the church. And check out the full line-up in the Bryant Lake Bowl theater, including music, comedy, and Fringe favorites like Mysterious Old Radio Listening Society and Reverend Matt's Monster Science.