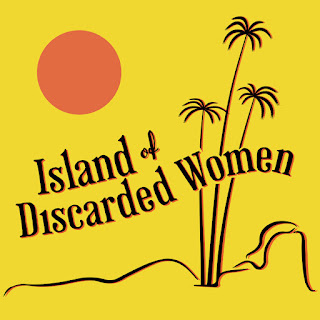 In May of 2020, I posted a piece called "I Listen to Podcasts Now!" Prior to the pandemic I listened to a few podcasts, but as it probably did for most people, the number of podcasts I listen to has increased exponentially in the last year and a half. One of my few pre-pandemic podcasts was Island of Discarded Women, created and hosted by #TCTheater artist and long-time voice actor on A Prairie Home Companion, Sue Scott. The monthly podcast was recorded live onstage in 2019 (I was hoping to attend my first one in spring 2020), and moved to at-home/zoom recordings during the pandemic. Now the live recordings have begun again in their new home, the Woman's Club of Minneapolis, the second Sunday of every month (proof of vaccination required, plus masks when not enjoying the dinner and drink service). I was thrilled to experience my favorite local podcast live last weekend!
Sue started the podcast after she was fired from her job, when she was told that her voice was "too old for radio," a jumping off point to discuss a variety of women's issues (which are of course human issues). Each episode contains sketches about a literal island where women like her wash up and are given jobs. A rotating cast of actors, writers, and artists (including but not limited to Shanan Custer, Dexieng Yang, Silvia Pontaza, and Mo Perry) participate in the sketches, and are also given the opportunity to share their own stories. Resident musician singer/songwriter/guitar and piano player Zippy Laske leads the musical portion of the show, and many favorites from the #TCTheater community also make appearances (including Nora Montañez in the episode I saw, singing a song from the exciting new musical Protest: A Revolutionary Rock Opus). In each episode, Sue interviews an ordinary extraordinary woman with a story to tell, with an open, friendly, curious, fun interview style.
Over the last few years, Island of Discarded Women has morphed and grown into something that has highlighted many different women's voices and allowed many different women's stories to be told. During the racial reckoning that followed the murder of George Floyd last year, Sue invited activists and scholars from the Black community onto the show, freely admitting her own biases and privileges in an effort to learn and grow and do better. She's interviewed sexual abuse survivors, women of faith, transgender women, explorers, and most recently, founder of ERA Minnesota Betty Folliard. Sue is using her platform, and what she knows how to do, to create a podcast (the modern equivalent of a radio show) that is fun, entertaining, educational, and inspiring, and amplifies too often unheard voices.
You can listen to all 18 episodes (soon to be 19 when this week's live episode is uploaded) of Island of Discarded Women, each about 40-60 minutes in length, on the website or wherever you get your podcasts. The next live recording is at the Woman's Club on November 14 (click here for tickets).
WWSHUSH!
When
Women
SHow
Up
Shit
Happens