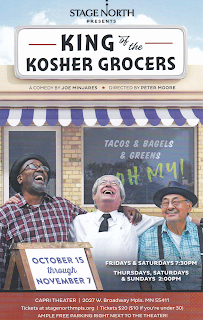 New #TCTheater company Stage North (not to be confused with Stage North Theatre Company in Brainerd) makes its debut in the newly remodeled Capri Theater in North Minneapolis with King of the Kosher Grocers. This charming play that is an homage to the neighborhood, first produced by Mixed Blood Theatre in 1992, is a great first production for a company whose mission is "creating vibrant, live experiences that bring people together to tell and celebrate stories of urban life... Our hope is that Stage North will help bring new audiences and new excitement and vitality to the North Side business district and contribute to the neighborhood's continuing growth and expansion" (read the full statement here). Unfortunately, North Minneapolis is a neighborhood known more for its crime and violence than for the community and culture of the people who live there. Of course, theater can't solve all of the problems, but it can shine a light on overlooked people and communities. This play does just that - celebrates the diverse community of people and the vibrant history of this neighborhood.*
It's 1991 in North Minneapolis (specifically, March, so sadly no Twins World Series Champion references). Izzy Silvers (Michael Tezla) is known as the "King of the Kosher Grocers" in this neighborhood that used to have a large Jewish population, as well as other immigrants from around the world. He's been running the store for 50 years and knows all of his customers and their needs, but the times, they are a'changin. Izzy's store now also sells tortillas, homemade by the wife of buddy Joe Chavez (Pedro Bayón, a last-minute replacement for playwright Joe Minjares, out due to illness the first weekend), and collard greens, serving the Black community, represented by the third member of this friendship trio, Elvis Mooney (James A. Williams). The three old friends hang out at the store, drinking coffee and gossiping about the neighborhood. Elvis' grandson Jamar (Ian McCarthy) works for Izzy and has some new ideas about how to run things, with some help from his friend Billy (Domino D'Lorion). Izzy reluctantly agrees to start making changes, especially with city inspectors (played by Melanie Wehrmacher and Pearce Bunting) finding issues left and right. This is one of those plays in which not a whole lot happens, but we get to know and love these very specific characters in the slice of life story.
Peter Moore directs this excellent seven-person cast, comprised of a mix of #TCTheater veterans and talented young artists (Ian and Domino are two of the three creator/stars of the 2019 Minnesota Fringe hit Stoopidity). There's a naturalness and congeniality amongst the cast; they really feel like old friends and neighbors. A play needs an antagonist to set up the drama, and unfortunately that role falls to the one female character, the inspector played by Melanie. In danger of being a one-dimensional villain, she fortunately has a monologue near the end in which she talks about how she's just doing her job, which as the only woman in the department she has to do twice as well to be respected. Our grocery store buddies still don't like it, but they (and the audience) see her as a little more human.
The fantastically detailed set feels like a real grocery story, if anything a little more neat and put together than it's supposed to be. Mid-show, it undergoes a lively upgrade to make it even more sparkling, with rows and rows of (faux) boxes of food on crisp and colorful shelves. The costumes hint at early '90s but don't scream it; the older gentlemen obviously wouldn't bend to current trends. (Set design by Michael Hoover, prop design by Rick Polenek, costume design by Rebecca Karstad).
The neighborhood portrayed in this play is really the American dream - different cultures living together, each maintaining their own identity and traditions, but working together to create a shared community. It's a promising debut for Stage North, and I look forward to what's next for them, with a commitment to producing three plays a year at the Capri. I'd been to the space a few times before, and it looks spruced up and new, with a large open airy lobby and multiple spaces. Its primary purpose is to serve the people of the community with events and gatherings, but when not in use, it would be great to see other theater companies utilize this beautiful North Side space (with a free parking lot).
King of the Kosher Grocers continues Thursdays through Saturdays through November 7 (click here for info and tickets).
*For more on the history of the North Side, check out this great TPT documentary.