"Circle Mirror Transformation" at Theatre in the Round 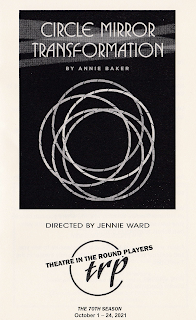 The oldest theater in Minneapolis returns from the very long intermission; Theatre in the Round opened their 70th season with the sweet and awkward little play Circle Mirror Transformation. Unfortunately it has already closed, but their season continues with four more productions through next summer, including the Agatha Christie mystery A Murder is Announced, opening in November. But in the meantime, read on for more about Circle Mirror Transformation, which I caught on closing weekend.

The entire 90-minute play takes place in a six-week community acting class in a small town in Vermont. We mark the passage of time with a projection on the floor announcing the week. The play is constructed as a series of short scenes depicting class exercises, as well as interactions between the characters during breaks or before class. As the play progresses we piece together more and more of each person's story. Teacher Marty (Julie Phillips) wants to share her love of the art with her students, one of which is her husband James (Doc Woods), an original hippie. Theresa (Marci Lucht) was a struggling actor in NYC until breaking up with her boyfriend and moving to Vermont a few months ago. Lauren (Natalia Wendlandt) is a typically sullen teenager who signed up for the class to help her win the role of Maria in her school's upcoming production of West Side Story, and wants to know if they're going to do any "real acting." The final student, Schultz (Thomas Buan), is going through a bit of a mid-life crisis, recently divorced and dealing with living on his own and trying to make a new start.*

Each of these characters comes to the class for a different reason and gets something different out of it, but as the title suggest, each is transformed, in big or small ways. We witness the entire course of a relationship between Theresa and Schultz, from nervous attraction, to giddy infatuation, to a really awkward breakup, to some sort of closure. Marty is not quite as together as she seems and has some issues of her own to work through, with or without the help of her husband. Lauren is trying to escape some family issues, which she's finally able to admit in a really fascinating class exercise - each class member tells another person's life story, which reveals as much about the speaker as it does about the subject. This play is really a character study, and playwright Annie Baker has quite brilliantly allowed us to gain vital tidbits of information about each of them in an unconventional way, without telling the full story. One gets the sense that this is just a short snippet in each character's life, a full and complex life that started long before the action of the play began and continues long after it ends.*

One of the things that I love about this play is that it's full of awkward pauses, and director Jennie Ward gets the pacing and tone just right, allowing some moments to linger, while others pass quickly. There's a beautiful balance between humor and pathos, with moments that are funny or sad or poignant, but above all very human. The excellent five-person cast all make their characters feel real and lived in.

Theatre in the Round's space is perfect for this play; what better place to perform a play called Circle Mirror Transformation than in a literal circle?! The floor of the performance space (which audiences walk across to get to their seats, now general admission to allow for spacing) is covered in patterned carpet squares like you might see at a community center. The mirrors are represented by a tall narrow sheets of plexiglass with a barre across it, each one belonging to a character and serving as their home base. They move it around the space, and even change their casual chic character specific costumes next to them between weeks. (Set design by Dietrich Poppen, costume design by Deb Murphy). The transformation comes in what each character gets out of the six-week class, both big and small. The circle gets smaller and smaller as the weeks progress, until at the end, it expands and disappears as our now beloved characters re-enter the real world.

Theatre in the Round's Circle Mirror Transformation was a sweet, poignant, funny, wonderfully akward play, and I'm sorry I wasn't able to tell you about it sooner. But check out what else the oldest theater in town has in store for their milestone season (click here for details about the season).

*Plot summary borrowed from what I wrote about the 2013 Yellow Tree Theatre production.