Broadway Tour of "Frozen" at the Orpheum Theatre 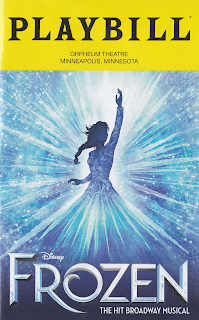 Last Sunday, the re-opening of Broadway after an unprecedented shutdown of a year and a half was celebrated with the Tonys and a fabulous primetime concert called Broadway is Back. Just a few days later, Broadway is back in Minneapolis, in a big way. The Broadway tour of the musical adaptation of the hit 2013 Disney movie Frozen, which was originally scheduled for May 2020, has finally arrived on Hennepin Avenue. Maybe it's partly because I hadn't seen a Broadway tour in so long (not since The Band's Visit in December 2019), but I, and probably everyone in the nearly packed house, found this show to be absolutely thrilling. Jam-packed with great musical numbers, theater magic creating wow moments, and a heart-warming story about the love between sisters, Frozen is a fantastic celebration of the return of theater (continuing through October 20, click here for details and to purchase tickets).

From what I can recall of the movie, the story has been adapted pretty faithfully (with "hidden folk" replacing the trolls the movie), which isn't too surprising considering the original screenwriter Jennifer Lee wrote the book, and original songwriters Kristen Anderson-Lopez and Robert Lopez wrote the additional songs. In a nutshell, two royal sisters who once were close grow distant due to elder sister Elsa's secret magical powers, which explode upon her coronation, sending her off to live in the frozen wilderness alone. She's rescued by younger sister Anna, and in turn rescues Anna and the town from eternal winter. While some of the plot points are a bit sticky (parents telling their child to stuff their feelings inside, the Disney trope of parents dying, an out of the blue 180 turnaround in the character of Hans), the beautiful thing about Frozen is that it's a princess story in which the princess finds true love in her sister, rather than some guy she just met. A story that highlights unconditional love and support between women, even when they're very different people who may disagree, is something to celebrate.

While I've been back in the theater for a few months now, this is by far the biggest show I've seen, in terms of the size of the building, audience, cast, and just the sheer scale of the production. The massive set pieces move in and out, creating the diverse worlds of the dark and shuttered castle, to the frozen expanses of the mountains, to the lush green world of the hidden folk. Using technology, creative lighting design, and just good old-fashioned theater tricks, some stunning effects are achieved - including the freezing and unfreezing of the world, a couple of thrilling dress reveals, and Anna's transformation to frozen statue. The lush and magical costumes range from the regal attire of the royal court, to the hill people's nature-inspired gear, to barely there towels (scenic and costume design by Christopher Oram, lighting design by Natasha Katz).This entire cast is so talented, but let's face it, all of us in #TCTheater are in this for Caroline Innerbichler. She's been performing at local theaters since she was a child, including recent starring roles in The Little Mermaid and Grease at the Chanhassen, and Mamma Mia! at the Ordway. This is her first big role on the national stage, and I'm so pleased and proud that now all of North America will know what we in Minnesota have known for years - Caroline Innerbichler is a star. She's such a joy as Anna, bursting with energy and charming awkwardness, singing like a dream (as always), possessing chemistry with everyone she's paired with, and really doing #TCTheater proud in the way she complete owns her hometown stage.Our Caroline plays opposite Caroline Bowman as Elsa, who's also fantastic. They're both perfectly cast for their roles and complement each other well. Anna's two love interests couldn't be more charming - Austin Colby as the dashing prince Hans, and Mason Reeves as the friendly ice-seller Kristoff who aids Anna on her quest. Other standouts in the large, diverse, talented cast are the puppeteers/actors F. Michael Haynie manipulating the Olaf puppet while still visible and in character (think The Lion King), and Collin Baja somewhere inside the very realistic Sven the reindeer puppet/costume. Two actors alternate in the latter role, because they're basically walking around in down dog with hands elevated on stilts, which I imagine is quite physically taxing. But the effect is worth it, and the playful chemistry between Sven and Kristoff is a delight (puppet design by Michael Curry).The score contains all of the favorites from the movie, along with about a dozen new songs, most of which are really great and fit right into the story. The Anna/Kristoff duet "What Do You Know About Love?" is playful and later poignant, and the Act II opener "Hygge," which is completely unnecessary for the story, is a joyful highlight of the show, especially for Minnesota audiences who are not only more familiar with Scandinavian culture than most, we also know the proper pronunciation of sauna (that's sow-na not sah-na). Veteran Broadway choreographer Rob Ashford has created some wonderful dance numbers, none more fun than the Anna/Hans duet "Love Is an Open Door," which includes just about every dance style imaginable and some truly impressive (and intentionally awkward) lifts.

If you've missed the magic of the big Broadway show, you're in for a treat, because this show is all magic. And of course, talent and hard work by everyone involved with bringing Broadway back to Minnesota. The check-in process went smoothly for me, but I arrived very early and took advantage of the vaccine pre-check at the State Theatre that opens two hours before showtime. I recommend getting to the theater at least a half hour early, with your vaccine card (for 12 and older), ID, and mask, to allow for plenty of time to get to your seat. Or come even earlier and have dinner in one of the downtown restaurants, who also need our business as they begin to return from this difficult time. It was exciting to see so many people in our beautiful city of Minneapolis again, eating, socializing, taking in some great entertainment.

The Broadway tour of Frozen welcomes us back to life after many of us have been hibernating for way too long. It's a beautiful celebration of sisterhood, community, and persevering through difficult times by working together. I teared up at several moments during the show, especially at this inspirational ending, signaling a hopeful new beginning for theater and for our world.