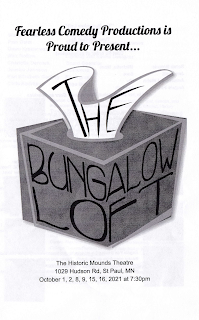 Fearless Comedy Productions returns with a brand new comedy play by #TCTheater favorite Shanan Custer! Although maybe it's more of a dramedy, as it features two sisters discovering some secrets about their recently deceased mother and deals with themes of grief, loss, regret, memories, mental illness, and challenging family relationships. Presented in an intimate in-the-round (or square) space on the floor of the Historic Mounds Theatre, The Bungalow Loft is funny and real and brought to us by an all-female cast and creative team.

The play begins with Sam (Jen Scott) being shown her mother's secret apartment in Uptown by the overly helpful landlord/lady/manager person Michelle (Sarah Broude, who also makes an appearance as mom, spoiler alert). She's invited her sister Viv (Ambrosia J Webb) and childhood neighbor/friend/third sister Hannah (Angela Fox) to this address without telling them why. She soon discloses that she just found out that their mother, who died a few months ago from a brain tumor, has leased this apartment for years and left it to her. The story involves the three of them theorizing and looking for clues about what this apartment meant to their mom, and what she's trying to tell them now. They also discuss whether their mom struggled with mental illness, or long-term effects of a previously undiagnosed brain tumor, or was just eccentric, and which of those things she might have passed on to her daughters.
Director Dawn Krosnowski achieves a natural, funny tone from her cast, who all feel like old friends/family (except poor awkward Michelle). Shanan's script paints these characters as very real and specific - Sam is the tough older sister who left for college and never looked back, Viv is the free spirit younger sister who guides in the BWCA, Hannah is the sweet and naive but surprising wise one. The humor comes from the everyday situations of life and the relationships between the characters, who love each other but don't always agree. Pop culture references (from Nancy Drew to The Bridges of Madison County) pepper the script and help the characters express their feelings. Also contributing to the reality of the play is the cast eating actual food, including yummy Trader Joes's snacks and Chinese food with chopsticks (impressive while acting!).
The Historic (and possibly haunted) Mounds Theatre in St. Paul's Dayton's Bluff neighborhood is a versatile venue for theater, a restored 1920s movie theater complete with popcorn, snacks, and a full bar at the concession stand (which is open for this show). Instead of using the stage with traditional proscenium seating, the performance takes place in a small square surrounded by a few rows of comfy chairs on the floor in front of the stage (characters enter and exit the space from the stage, so the best seats include a view of the stage). This creates an intimate feel, as if we're in the apartment with the characters. A door, coat rack, and desk are the only set items in the apartment that's supposed to be sparsely furnished. The cast is dressed in character -defining casual clothes, changing to comfy PJs in Act II, which also features realistic lighting and sound effects creating a storm. (Costume design by Jessica Johnson, set design by Dawn Krosnowski, lighting and sound design by Alex Rollins.)
If you're a fan of Shanan Custer's work as a writer/actor/comedian, you'll likely enjoy this play that features her signature mix of humor and humanity, natural dialogue, and of course Target references. The Bungalow Loft continues Fridays and Saturdays through October 16 (click here for details and to purchase $10 tickets, proof of vaccination and mask required).