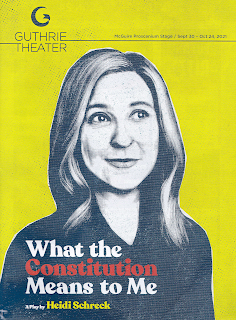 In the middle of my 17th season as a Guthrie Theater subscriber, a global pandemic shut down live performing arts. Since it opened in 2006, I had been going to the big blue beautiful building on the river once every month or two, and then suddenly, it all stopped. I was beyond thrilled to return to the Guthrie, my happy place, this week to experience the national tour of the Tony-nominated Broadway play What the Constitution Means to Me. With a mask on my face and a vaccine card in my hand (which, after a solid month of indoor theater-going, feels normal), walking through the familiar spaces felt like coming home. And what a play to begin this new season of theater! I had seen the filmed version of the Broadway play on Amazon, but seeing it live in person is how it was meant to be seen. Written by Heidi Schreck, who also played the role of herself on Broadway, this play is part civics lesson and part very personal story, as it very seriously (and humorously) explores the issues of domestic violence, abortion rights, and generational trauma. It is simultaneously depressing and hopeful about the state of our nation. Which is pretty on track for the world right now. Two years after its Broadway premiere and we're still very much in the thick of it, and this play perhaps helps us see things in a new way.
The fun thing about What the Constitution Means to Me is that it doesn't pretend it's not a play; there are several fourth-wall breaking moments throughout the show. It's like a great solo Fringe show, in which the playwright/actor tells the story of her life in a funny, emotional, and relatable way. When Heidi was 15, she toured the country competing in debates about the constitution, which paid her way through college. She starts off being her 15-year old self, on a stage that looks very much like a small town American Legion hall in the '80s. She gives the speech as near as she can remember, full of all the teenage excitement and angst. But as things get tough, she drops the artifice and continues as her current self. Heidi's family tree includes violence and mental illness, and she skillfully connects those issues to the constitution and its amendments in clear and precise ways. Our constitution was not set up to protect women or people of color, in fact it barely considered them, and amendments have only come so far in remedying that.
In this touring version of the play (which features the same director, Oliver Butler, and creative team as Broadway), the role of Heidi is played by Cassie Beck. Her performance so winning and natural that it's easy to forget that she's not the real Heidi, until she introduces herself as Cassie at the end of the show and tells us a bit of her story. And although it's mostly a solo show, she's not alone onstage. Reprising his role from Broadway, Mike Iveson plays the Legionnaire competition host, until he, too, drops the character and tells us a little bit about himself and his connection to the ideas put forth. All of this is a really touching way to experience both the performance aspect of the show, and the behind-the-scenes truth of its creators.
The play ends with a debate between Heidi/Cassie and a student traveling with the show, Jocelyn Shek at the performance I saw. Having seen the Amazon version, I was hoping they'd feature local students in this segment, but I understand that the logistics of touring, especially today, probably made this impossible. They debate whether to keep or toss the constitution, each taking different sides at different perforances. It's a fun, loose way to end the show, with a bit of audience involvement (and a pocket constitution for all, thanks to the ACLU!).
This funny, heart-breaking, beautiful, and necessary play continues at the Guthrie through October 24, to be followed by the first post-pandemic Guthrie production, an all new take on the 40+ year tradition of The Christmas Carol, and an exciting season of classics and new plays.