"Every Brilliant Thing" at the Jungle Theater 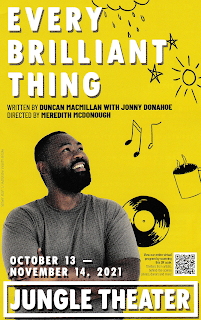 Jungle Theater couldn't have chosen a better play with which to return to live programming than Every Brilliant Thing. After living apart for so long during this ongoing pandemic, Every Brilliant Thing is all about the connections between people and celebrating the little (and big) things that bring us joy in the midst of the traumas of life. As the Jungle's new Artistic Director Christina Balwin notes in the virtual program, "this beautiful play is performed with the audience, not at them." A live audience is what makes theater theater, and it's what we've all been missing. I can't think of a play in which the audience is more vital than this one. It feels so good to be in a room with other humans again, experiencing and even participating in one of the oldest human artforms - storytelling.
I first saw this brilliant little play at Great River Shakespeare Festival in Winona this summer and summarized it thusly: "In this solo play, a man shares with the audience his life-long endeavor of making a list of  'every brilliant thing.' He started it as a child to cheer up his mom, who was hospitalized several times for attempted suicide. Of course, a child's sweet simple list can't possibly fix a complex mental illness, and this play deals seriously with suicide and depression, but not without humor. But the list became a throughline for this man's life as he left home, married, endured hardships, and later suffered a depression of his own. In his darkest times, the list would remind him of the little things, from ice cream to the smell of old books, that bring joy." It's a beautifully written piece, and director Meredith McDonough brings out all of the life, humor, and drama of the 60-minute script.
The thing that makes this play special is that it's a communal event, with the audience playing a role. The narrator of the play calls on the audience at certain times, here played beautifully by JuCoby Johnson with such warmth, heart, and humanity (and Joy Dolo on Thursdays, because it doesn't have to be "the man" as I described above). Before the show, JuCoby passed out slips of paper to audience members, all numbered and containing anything from a single word to a long phrase. As he's writing the list, he calls out a number, and the audience member with the corresponding number reads out the phrase. He also calls upon audience members to portray the roles of a veterinarian, representing the narrator's first experience with death; a school counselor he talked to after his mother's first hospitalization; his taciturn father; and a college professor teaching The Sorrows of Young Werther, a novel by Goethe which is said to have inspired copycat suicides. The latter role was played by yours truly, and even though I've learned it's OK to say "no, thank you" to audience participation (Maureen, I'm not a theater person), how can you say no to JuCoby?! (And at least that German minor finally came in handy.) He makes it so easy and not scary, encouraging the audience in their roles, commenting on or agreeing with certain list items, and reacting so naturally to what the audience "actors" give him (including a couple of pros on opening night).
Another thing that makes this feel like a communal event is the design of the show. I've never seen the Jungle Theater like this. They removed several rows of seats near the stage and constructed a new stage in that space, and moved those rows of seats onto the usual stage (which I hear still houses the Redwood set, originally scheduled to open in March 2020 and up next at the Jungle) to create a corridor or traverse stage. JuCoby performs on the long narrow stage, populated with just a table, a few props, and some rugs, to the audience on two sides of him. He often jumps down from the stage, sitting on the edge or walking through the aisles, making eye contact with the audience while the house lights are up for the whole show, because we're all in this together. Music is an integral part of the story; the script mentions specific music and albums, and we get to hear these songs, which so quickly puts you in the mood of the moment. Although I suspect some of the music and cultural references have been updated, since the play was originally written in England nearly ten years ago. (Scenic and costume design by Mina Kinukawa, lighting design by Marcus Dilliard, and sound design by Montana Johnson.)
If you have yet to return to live theater, I can't recommend a better place to start than Jungle Theater's Every Brilliant Thing. Proof of vaccination or negative COVID test, plus masks, are required for all attendees, seating is general admission so you can spread out to your comfort as space allows, and it's only an hour long. And this play truly exemplifies everything we love about theater and have missed so greatly, and that just can't be replicated over zoom - the shared humanity of laughing, crying, breathing in a room with friends and strangers, sharing the communal and ephemeral experience of live theater.
Every Brilliant Thing continues Tuesdays through Sundays (with Joy Dolo performing every Thursday) through November 14. Tickets available on a "pay as you are" model (click here for info and tickets).