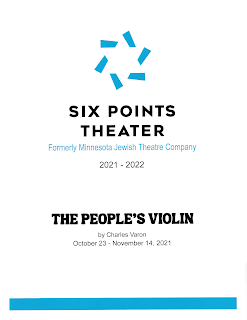 The only play I saw live and in person in the last ten months of 2020 was Minnesota Jewish Theatre Company's 25 Questions for a Jewish Mother, performed outdoors at various locations. They produced another outdoor play this summer, A Pickle, as well as multiple virtual offerings over the last year and a half. I can't tell you how much creative theater offerings like this kept be going through the very long intermission from live performance, and I'm thrilled that we're finally returning (with the help of vaccines and masks). Minnesota Jewish Theatre Company marks their return to their Highland Park space with a new production, The People's Violin, and a new name - Six Points Theater (watch a video about the name change here). But what hasn't changed is the thought-provoking, meaningful, entertaining, high quality work that they do, exploring Jewish culture and identity, with relevance to the world at large. The People's Violin is another such play.

Playwright Charles Varon wrote The People's Violin as a solo piece about 20 years ago, performing all of the roles himself. But it has since been performed with multiple cast members. Six Points Theater has chosen to cast five people to play the multiple roles, adding an element of interactive filmed scenes, with two of the cast only appearing on film. This is a great example of "content dictates form," since the narrator is a documentary filmmaker reviewing archival footage as well as recorded interviews. It's also a smart choice for this pandemic era, expanding the cast virtually.

The narrator, Sol Shank, is making a documentary about his father, a recently deceased world renowned psychologist who has worked with Holocaust survivors. To say Sol has a difficult relationship with his father is putting it mildly, and he also feels like he's living in his father's shadow; his father is more famous than he is, as he struggles to get his work seen and distributed. He thinks this might be his big break, and begins researching his father's life, particularly his mysterious childhood that he never talked much about. Sol finds more than he bargained for (with the titular violin being the key to unlock the mystery), realizing that he didn't know his father at all, which sends him on a crisis of identity himself. If the stories he was told about his life and family history aren't true, then who is he?The action seamlessly moves from live on stage in front of us, to filmed pieces projected on a large screen (a minor technical blip the night I saw the show did not mar the experience). Some of the interviews happen live between Sol and another characters, and sometimes the interviewee appears on screen while live Sol asks questions and responds to the answers with impeccable timing so that it feels like an actual conversation. Other scenes with faux archival footage play straight through, as Sol reacts to what he's seeing. The scenes with his wife and girlfriend (did I mention mid-life crisis?) are all performed live, breaking us out of film mode into Sol's real life. Director Warren C. Bowles and video designer Ryan Melling have done a great job melding the two media into one cohesive and compelling story.#TCTheater veteran actor JC Cutler, in his debut with this theater company, gives a strong performance as the tortured Sol, going on quite the existential journey over the course of two hours. He's in every scene, even if it's just watching the film, his reactions giving us further insight into the character. New to #TCTheater, Lea Kalisch makes a great impression as Sol's wife (and girlfriend), who supports and challenges him. The other live actor is David Coral, playing too many roles to count, including some on film, totally transforming with a change of costume and facial hair (at one point I had to look at the program to see just how many actors were in this show). Giving wonderful filmed performances are Patty Mathews as Sol's mother at various ages, and others; and Tony Larkin as multiple characters being interviewed by Sol, also changing appearance with the aid of costumes and hairstyle, and also background (costume design by Morgan Rainford). I don't know where the scenes were filmed, but it looks like multiple various backgrounds, whether real or virtual. The onstage set is clean, simple, and effective (as expected of Michael Hoover), dominated by the large screen at center stage.
Check out the newly rebranded Six Points Theater, continuing their 25+ year legacy of telling interesting stories from the Jewish perspective, with The People's Violin, continuing through November 14.