"Not For Sale" at the History Theatre 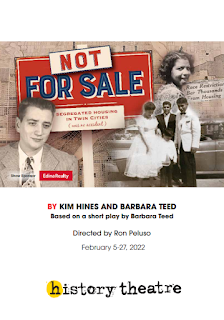 Part two of History Theatre's pair of new original plays based on Minnesota's history of segregation and redlining is now on stage. Originally scheduled to run in rep in March 2020, the two plays were split up this season, with Not in Our Neighborhood premiering last fall, and Not For Sale last weekend. It would have been nice to see them in rep (although perfectly understandable why that plan was shelved in the wake of new covid safety protocols) because they really are two chapters in the same story. The long, complex, ugly story of racism in Minnesota that continues to play out on a daily basis. There's a direct line from Black families being denied the opportunity to purchase property in certain neighborhoods, or at all, to the racial injustice we see today. Plays like these help us to remember our history, so that we can build a better future.
Last fall's Not in Our Neighborhood told the true story of a prominent Black family in 1920s St. Paul who decided to move from the thriving Black neighborhood Rondo to the white neighborhood Groveland Park, and the literal cross-burning they faced. Not For Sale takes place about 40 years later, after Rondo was destroyed by the construction of I94 (the subject of History Theatre's 2017 play The Highwaymen), when a white realtor has the gall to try to sell homes to some of the displaced Black families in neighborhoods marked, officially or unofficially, for whites only. This is the true story of Arnold Weigel, the father Barbara Teed, who wrote the play along with playwright Kim Hines. In just over two hours, we watch Arnie lose everything - career, home, family, and health - simply because he sold homes to Black, Latinx, and other families of color in white suburban neighborhoods, some of which actually had written documents preventing the sale of property to Blacks, Jews, and other people of color (real equal opportunity racists). Arnie's colleagues blackballed him and he lost his business, his friends rejected him for the "trouble" he was causing, his children were teased at school, and finally, he and his wife lost their home and she left him to provide the kids a more stable life. It's a tragedy what happened to this one family for trying to do the right thing, but there are countless more tragedies in the untold stories of Black families denied opportunities for generations.
Directed by Ron Peluso, the cast really brings out the humanity in these characters (except for the
racists, who are pretty clear villains, spouting a lot of ugly and ignorant rhetoric that's difficult to listen to). Andrew Erskine Wheeler and Charity Jones are both wonderful as Arnie and his wife Ivah, and Kendall Olson and Carter Monahan are their charming children, rounding out the family dynamic. The large and talented ensemble plays multiple characters, the transition aided by Anna Hill's '60s period clothing (but not too flashy, these are St. Paul families). The set is the same as Not in Our Neighborhood since they were already built for the two shows in 2020 - a clever and versatile silhouette of a house, with different images and videos projected onto it to depict the different homes and other locations (scenic design by Rick Polenek, video design by Kathy Maxwell).
Watching this play is depressing, but necessary. Depressing because it sometimes feels like we haven't made any progress in racial equality and justice in the last 50 years (the program notes that Minneapolis/St. Paul has the lowest rate of Black home ownership of any US city, a despicable statistic). But necessary because understanding our shared history, the good, the bad, and the ugly, is vital to understanding where we are today, and why. Not For Sale continues at History Theatre in downtown St. Paul through February 27, and will also be available to watch virtually (click here for more info).