Broadway Tour of "Pretty Woman: The Musical" at the Orpheum Theatre 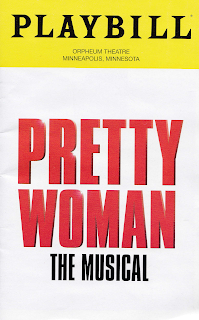 Now playing in the "Broadway on Hennepin" season at the Orpheum Theatre in downtown Minneapolis: the 2018 musical adaptation of the iconic 1990 film Pretty Woman. Did Pretty Woman need to be made into a musical? Probably not. Is it fun? Sure. Is the cast bringing it and making the most of every moment? Absolutely. Was it worth driving through snowy Minnesota streets to see original RENT cast member Adam Pascal? You betcha! To be honest, he's the only reason I saw the show, not being a fan of movie adaptations in general. But I can't deny that it's a fun show with fantastic performances by the entire cast, and if you love the movie, you might love seeing it come to life on stage. Is it the best show in this 2021-2022 season? Not by a long shot, but I had a great time. It's only in town for a week; click here for more details and ticket info.

I just re-watched the movie last week (research is tough for this gig), and this adaptation stays very close to the original. Not surprising considering the book was written by the movie's director (Garry Marshall) and screenwriter (J.F. Lawton). You have the meet-cute between wealthy businessman Edward and prostitute Vivian on the streets of L.A.; the Rodeo Drive shopping excursions; the Pygmalion-like scenes of Vivian changing her style, learning to dance, and awkwardly trying to fit into Edward's world; the opera scene where the two attend La Traviata (which shares a similar plot) with Vivian wearing that icon red dress; and the happily-ever-after scene in which Edward rescues Vivian, and "she rescues him right back." It all happens as expected, and you can see where they've wedged some big Broadway moments into the story (which are kind of the most fun). But at times, some of the humor gets a little too broad and slapsticky for what the story needs.The original score has a late '80s/early '90s rock kind of vibe, so who better to write it than Bryan Adams (with Jim Vallance)? And who better to sing it than Adam Pascal, one of the stars of the '90s rock musical RENT? No one that I can think of. Twenty-six years after RENT's premiere, Adam sounds better than ever, especially on the rock ballad "Freedom." His Edward starts off appropriately reserved, but the emotion grows as the story continues. Olivia Valli sounds fantastic as Vivian, but it's hard not to compare her to Julia Roberts, which is an unfair comparison for anyone. She comes off as a little too brash and goofy in the beginning, but brings in some of the softness and heart towards the end.There are a couple of absolute scene stealers in the large, talented, and gorgeous cast. Kyle Taylor Parker (who played Lola in the Kinky Boots tour, seen at the Orpheum in 2015) plays a character called "Happy Man," and functions almost like a fairy godfather, showing up in a number of places as different characters, each more delightful than the last, most notably the hotel manager who helps Vivian reform her image. The character is aptly named, because every time he showed up it made me happy. Jessica Crouch is fantastic as Viv's friend Kit, and absolutely wails on some of her songs. Last but not least, Dance Captain and swing Nico DeJesus played the role of Guilio on opening night, the adorable hotel bellboy who is always around to join in on dance numbers, with sharp and precise movements.The big set features scaffolding and neon lights for the mean streets of L.A., and a couple of gorgeous arches dropped down for the hotel and Rodeo Drive locations. No car or bathtub, those remain off-stage, which is OK because that could get gimmicky. The costumes are inspired by the movie, but not identical (the brown polka-dot polo dress is blue, a slightly different cut on the red dress), just different enough to make them interesting but still satisfying the need for those those iconic movie images. The six-person pit orchestra is a great rock band, and there's also nice variety in the score (and we get to hear a bit of La Traviata, which is thrilling). The choreography by Jerry Mitchell (who also directs) is one of the highlights of the show and ranges from the more earthy and raw dancing on the streets to some more elegant moments, all of it fresh and exciting.

Pretty Woman: The Musical continues at the Orpheum Theatre in downtown Minneapolis through February 27.