"An Evening with Ella and Harold" at Lakeshore Players Theatre 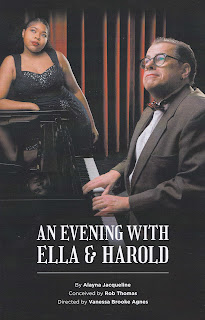 The Queen of Jazz and one of the greatest composers of the American Songbook -  a match made in music heaven. Such is the subject of the new original play with music by Lakeshore Players Theatre. An Evening with Ella and Harold parallels the lives and stories of Ella Fitzgerald and Harold Arlen, featuring music from the 1961 album Ella Fitzgerald Sings the Harold Arlen Song Book. Though they never met, the two were connected by music. Local playwright Alayna Jacqueline imagines a sort of conversation between them, for a lovely evening of music history and performance.
We meet Harold after the death of his wife. He speaks aloud to her photo as he grieves, reminiscing about their time together, including how she inspired him to compose one of his most beloved songs, "Over the Rainbow." Unable to bear the pain of playing it on the piano himself, he decides to listen to Ella's album of his songs. On the other side of the stage, we see Ella in a recording studio, speaking to her producer off-stage, as she records the songs Harold is listening to. In between songs, she speaks about her personal life, her difficult childhood, and the racism she faces as a Black performer in segregated venues. All of this informs her singing, from the happy upbeat songs to the ballads. The show builds to the performance of "Over the Rainbow," with Harold playing the piano while Ella sings from across time and space, as he says, bringing a new weight to the classic.
Vanessa Brooke Agnes, founder of Dark Muse Performing Arts, directs the play and really brings out the relatable humanity behind the two music legends. David Lohman, who also works as a music director around town, shows us all of Harold's grief and heartbreak at the loss of his wife, and the way he uses music to process it. Nikia Brown is wonderful as Ella, with a warm, rich, easy voice singing these classics, from "Get Happy" to "Between the Devil and the Deep Blue Sea." Most of the songs she sings to a recorded track, as Harold plays the album, but towards the end the two perform together, the highlight of the show (music director Haley Garland).
Harold's side of the stage is a room in his home, represented by a half wall, a bar cart, and a gorgeous grand piano. Ella's side is a simple microphone stand, table, and stool; she's dressed in a sparkly teal '60s era dress and beehive hairdo. The story alternates between the two characters, who rarely leaving the stage, each continuing on in the shadows while the focus is on the other (scenic design by Dave Pust, costume design by Bronson Talcott, lighting design by Alyssa Kraft).
Black History Month is great timing for this show, highlighting the life and work of one of the greatest singers of the 20th century, who used her fame and success to advocate for Civil Rights. Spend An Evening with Ella and Harold in at Hanifl Performing Arts Center in White Bear Lake, weekends through the end of the month.