"Marjorie Prime" at Theatre in the Round 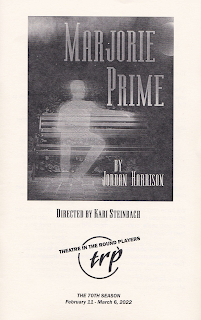 Now playing at the oldest theater in Minneapolis: the 2015 Pulitzer Prize finalist Marjorie Prime. This is the third show in Theatre in the Round's abbreviated five-show 70th season, which is an eclectic mix of traditional works and more interesting pieces like this. In just 80 minutes, the trippy and futuristic Marjorie Prime explores issues of aging, dementia, grief, depression, suicide, artificial intelligence, and complicated family dynamics. It's a fascinating and layered look at a multitude of relevant topics, well done by this cast and creative team. Continuing weekends through March 6 (click here for details).
The Marjorie of the title (played by Kristen Mathison) is an octogenarian woman (born long ago in 1977) suffering from dementia. To help care for her, her daughter Tess (Katie Wodele) and son-in-law Jon (David Denninger) have acquired a new bit of technology called a Prime. Which is a sort of computer hologram to talk to her and keep her company that knows everything. Or rather, it knows and remembers everything you tell it. And it can take on the form you choose, so Marjorie's Prime is a young version of her deceased husband Walter (embodied by Corey Boe). Tess and Jon tell the Prime about Marjorie's life, but leave out painful memories like the death of a child. Tess has a complicated relationship with her mother, and is skeptical about the Prime impersonating her father. As Marjorie's health declines, Tess grapples with her own aging and mortality, and the future she sees for herself.*
Kari Steinbach directs this strong cast with clarity and precision, but also allowing space for the great range of emotions in our characters (living or otherwise). Not to give away any spoilers, but Walter is not the only Prime in the story, and it's fascinating to see the subtle changes from one form to another. All of this plays out in Marjorie's chic and modern cool-toned living room/kitchen, with coordinating set pieces placed around the in-the-round space offering good views all around (my favorite term I've heard about acting in this space: backting, i.e., acting that projects emotion even from the back). Characters are dressed in casual and cozy athlesiure wear, except for Walter Prime's more formal attire, and lighting cues help to clarify the shifts in time and mood. (Set design by Devyn Becker,Jordan Harrison, costume design by A. Emily Heaney, and lighting design by Peter Gustafson.)

When I saw the play a few years ago, I was left with a series of questions that I'm not any closer to answering now: "Are we our memories? Are we just a collection of data? What happens when we lose memories? What happens when those memories, that data, is transferred into something else, does it become us? Can artificial intelligence replace humans?" And maybe because I'm three years older, or because of the excellent post-show discussion with an expert on dementia, I'm also left with questions about the aging process, how we treat and care for our elderly population, and how to assess quality of life. So many questions, like only a well written, concise, and well executed play can raise.

See Marjorie Prime at Theatre in the Round in Minneapolis' West Bank neighborhood, Fridays-Sundays through March 6.

*Plot summary borrowed from my review of Prime Productions' 2019 production.