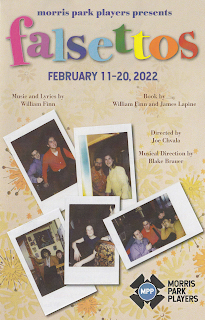 There's a ton of great community theater in the Twin Cities, but I don't get to see much of it because I'm kept more than busy attending shows by the plethora of professional #TCTheater companies. But when the only local theater to do Falsettos (in my recent memory) is a community theater, I'm there. The 1992 multiple Tony winner had a successful Broadway revival a few years ago, and I fell in love with this messy and real love story when I saw the filmed version in a movie theater, and the subsequent tour. I just happened to see that Morris Park Players, a Northeast Minneapolis-based company that has been around for 70 years, was doing Falsettos, and I was lucky enough to catch their final performance. This is not an easy musical, think Sondheim-level complicated lyrics and rhythms, and I was super impressed with MPP first for choosing it, and secondly for the way they handled the material with energy, skill, and heart. It looks like they do one or two shows a year, so I'll be watching for their next choice. You can too (follow them on Facebook here), or better yet, find out what community theater is performing in your neighborhood and give them your support!
The musical we now know as Falsettos began as a trio of one-act musicals with music by William Finn. After all three played off-Broadway, the latter two (with book co-written by frequent Sondheim collaborator James Lapine) were combined to form Falsettos, which premiered on Broadway in 1992, winning Tonys for best score and book. The first act introduces the "tight knit" but unconventional family consisting of Marvin (Michael Burton), his wife Trina (Katie Rowles-Perich), their son Jason (Tic Treitler), Marvin's lover Whizzer (Chris Sanchez), and Marvin's psychiatrist Mendel (Scotty Reynolds), who eventually marries Trina. There's a lot of drama, but a lot of love too as they try to figure out how to be a family. The second act includes new characters Dr. Charlotte (Anna Werner) and Cordelia (Marley Ritchie), the lesbians next door. It's a story about gay men in the early '80s in NYC, so you can guess where this is going, and where the doctor comes in. This little family has to deal with AIDS, and Jason's bar mitzvah, both of which are traumatic experiences that only serve to bond them tighter. What I love about this story is that it's not just a story of romantic love (although Marvin and Whizzer's love is passionate, messy, and real), but also of the love of parent and child, of co-parents who are no longer together but still forge a life together, of friends, neighbors, community. They say you can't choose your family, but this family chose each other.*
Falsettos is not your typical Broadway musical (which is a good thing in my book) for several reasons. There are only seven actors (five in the first half of the story), no chorus line, and no big dance numbers. And it's entirely sung-through, with a score that is brilliant both lyrically and musically, and harmonies that are so beautiful they break your heart. This isn't the typical dialogue - song with verses and chorus - applause break - repeat kind of musical. The constant singing keeps the emotions heightened, and there are a lot of emotions. It's funny, painful, awkward, poignant, and heart-breaking. All of these characters are so real and human that you can't help but feel for them despite their flaws.*
Another reason I had to see this show, besides my love of the material, is that it was directed and choreographed by Joe Chvala, Artistic Director of the dance/theater company Flying Foot Forum who has directed, choreographed, and performed on stages all over town (including my local community theater, Mounds View Community Theatre). Falsettos isn't a dance-focused show like I might normally associate with Joe, but there's still a lot of fun and energetic dancing. The words, story, music, and emotion are the star of this show, and they shine beautifully under Joe's direction, along with music director Blake Brauer, leading the small but mighty three-person (but two or three times that many instruments) band. This cast is really strong, with not a weak link among them, which you need for a true ensemble piece like this. And by the end they truly do feel like a real family.
Morris Park Players performs in the auditorium at Edison High School in Northeast Minneapolis, which has a big stage and a visible pit orchestra (at least for this show), and I always love being able to watch the band. The set includes a backdrop of a cartoonish two-dimensional city-scape, with blocks and couches moved around to form the various settings. The show takes place in the late '70s and early '80s, and the cast's groovy wardrobe reflects that era (scenic design by Drew Pannebecker, costumer Jennifer Schultz).
Thanks to Morris Park Players for bringing us this rare gem of a musical!
*Some text borrowed from my review of the 2019 Broadway tour.