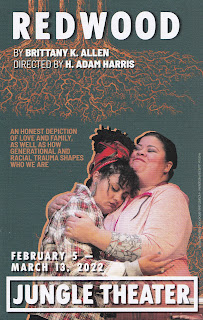 Nearly two years after its planned opening night that never happened in March 2020, Redwood is finally opening at Jungle Theater this weekend. A lot has happened in those two years, and the dramedy about an interracial couple who discovers an uncomfortable ancestral connection may play a little differently now (read more about that here). But through humor and a loving family, the exploration of the complicated connections that bind us, historically and presently, is ultimately hopeful. It shows us that globally, nationally, and personally, we need to acknowledge past traumas, but not let them define us as we move forward together. This funny, thought-provoking, and moving play (the title refers to the deep roots of a family tree) continues at Jungle Theater in Uptown through March 13.The play has a sort of mystical framework, and begins with welcoming in the spirits, which seems fitting for any work of theater, but particularly this one in which the ancestors play such a crucial role. Throughout the telling of the present story, these ancestors wander through, sometimes speaking, sometimes observing. Our couple Meg (China Brickey) and Drew (Kevin Fanshaw) have just moved in together, which Meg is struggling to tell her religious mother Beverly (Thomasina Petrus) about. Their relationship hits a road bump when Meg's uncle Stevie (Bruce A. Young), who has gone down the Ancestry rabbit-hole, discovers that Drew's ancestors owned their ancestors. This brings up all sorts of issues for the young couple, and they have some difficult and sometimes uncomfortable conversations about race, racism, and if/how this new information changes their relationship. Everyone in the family has a different reaction to the news, and grapples with it in their own way.H. Adam Harris returns to #TCTheater to direct this play, and strikes a nice balance between humor, discomfort, and poignancy. The cast is excellent, with the four above-mentioned actors truly feeling like a family, having had two years to develop the relationships (Thomasina and China are particularly endearing as mother/daughter). The rest of the cast (Dana Lee Thompson, Dwight Xaveir Leslie, Max Wojtanowicz, and Morgen Chang) play multiple characters and/or spirits. In a running gag, much of Stevie's inspirations come during fitness classes, with Dwight as the instructor and the others as fellow students. Stevie got rich in the dot-com era and has ample free time, so he tries everything, from hip-hop dance to prenatal yoga (with choreography by Austene Van), and it's fun to see each of these classes play out as Stevie leaves another message about his ancestral research for his not-so-interested family. We also get to see these ancestors, played by ensemble members, which gives a physical presence to the idea that our ancestors, our history, are always with us.Sarah Bahr's clever and efficient set includes several large pieces of modular shelves, with drawers opening and counters folding down to create the different spaces needed for the story, and still allowing plenty of open space for the fitness classes. Characters are dressed primarily in casual chic character-specific outfits (e.g., Stevie's African-inspired garb), with a few period costumes making a brief appearance, and some subtly stunning pieces characteristic of costume designer Trevor Bowen (I want the fitness instructor's super cool multi-pocketed jumpsuit!). There's a nice use of music throughout, in the fitness classes, or as background music in a coffee shop (sound design by Dan Dukich).

It's so good to be back at the Jungle again, in that familiar intimate proscenium red room (it was rearranged a bit for last fall's Every Brilliant Thing, one of my favorite indoor plays of the year). Another change in the intervening years is that Artistic Director Sarah Rasmussen has left, replaced with #TCTheater favorite Christina Baldwin. So this season is another new era for the Jungle, as they continue to tell important, engaging, enlightening stories. Redwood plays Tuesdays through Sundays through March 13, with all tickets on a pay-as-you-are sliding scale (click here for details).

I'll leave you with the words of the director, H. Adam Harris:

I hope this production encourages you to acknowledge our historic ache. To investigate your own missing stories. To drive back the shadows with communal laughter and an open heart. Know that we cannot escape our histories and our traumas, they are present with us. But through laughter, hard conversations, and a little ancestral magic, this play reminds us that love, radical love, will see us through.