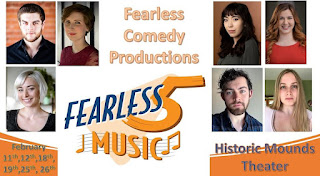 This was my first time seeing Fearless Comedy Productions' Fearless 5 show: "an evening of one act plays in which an ensemble of actors perform 5 original short plays, written by 5 different playwrights, and directed by 5 different directors." This year's theme is music, and combining music and theater is my favorite kind of storytelling, so I couldn't resist. In an era of jukebox musicals, movie adaptations, and repeated revivals (e.g., the upcoming Broadway touring season, which has not a single new original musical), it's exciting to see local playwrights explore the idea of music-theater, whether it's through full-blown musicals, or merely with music as an idea behind the story. Check it out at the cool (and possibly haunted) art deco-era renovated Historic Mounds Theatre in St. Paul's Dayton's Bluff neighborhood, Fridays and Saturdays through the end of the month (tickets just $10 - click here for details).

The five 20-ish-minute plays differ in topic, offering something for everyone. But as the evening continues a common theme arises - theater, art, and creativity. Three of the five shows feature a play-within-a play, and even those that don't speak to the creative process and the life of artists. The seven-person ensemble (Caleb Cabiness, Adrienne Reich, Emma Tiede, Mackenzie Diggins, Michael Bloom, Joy Ford, and Blair Kott) ably plays all of the characters, from four to eight per play, with quick changes of set and costumes in between. Music Director Chad Dutton accompanies the cast on keyboard and/or provides the underscoring, whatever each play requires.

The Bard by Kayla Sotebeer, directed by Aiden Milligan

With characters called bard, fighter, cleric, rogue, and wizard, I think this is a D&D inspired show, but I'm largely unfamiliar with that world. So to me it felt like a fun renaissance festival kind of spoof, wherein the title character has to break from his player friends to learn that he was awesome all along. The show is structured as a traditional musical, with several clever song and dance numbers (all shows choreographed by Blair Kott).

If memory serves, this is the only show that doesn't include any actual music. Rather, music is an inspiration for the plot, in which a '90s punk rock group, now middle aged (allegedly, the cast is a bit young for that), reunites to play at the titular festival. Some band members are more enthusiastic about it than others, now settled in the routine of a normal life. But in the end, they remember their love of creating music together.

Macbeth: The Musical by Tim Wick, directed by Dave Rand-McKay

The first play-within-a-play show is set at the first reading of a new musical adaptation of Macbeth. The show is chock-full of Shakespeare and theater references, including the silly superstition not to say "Macbeth" in a theater (I don't partake in that). The writer and director have different ideas of what the play should be, and then things get really weird when we find out just who the director actually is. The musical numbers (including the witches, and "something wicked this way comes") are delightful and made me wish I could see the whole silly show within this show.

Westbook Middle School is Proud to Present its Fall Musical which Opens Tomorrow for General Audiences by Denzel Belin, directed by Duck Washington

Backstage at the final dress rehearsal for Mortgage: The Musical (get it?), which is a little risque for Middle School, the teenage actors and technical crew experience more drama than what's on stage. The challenges and last-minute rehearsals to get this show on its feet are outweighed by secret romances and teenage angst. The cute and charming story is more play than musical, and it's fun to pick out the almost familiar tunes we hear bits of.

No Small Parts by Angela Fox, directed by Cara White

Another rehearsal of another show, this one explores the idea that "there are no small parts, only small actors." An alto chorus member is the focus of the show but not the show-within-the-show, as she laments the unchallenging part, but still loves the process. The clever multi-part songs lovingly spoof the traditional musical.

This entertaining evening of new original comedy-music-theater continues through February 26.