"Man of God" by Theater Mu at Mixed Blood Theatre 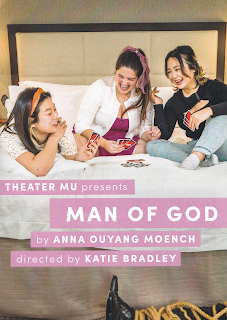 It's so exciting to continue to welcome #TCTheater companies back to the stage after the very long extended intermission of 2020-2021. Today's edition: Theater Mu, who are finally presenting the dark comedy Man of God, their first onstage production since Peerless in February of 2020. Man of God was originally scheduled to close out their 2020-2021 season, which included the fantastic virtual full production Today is My Birthday. Now the star of that show, Katie Bradley, is making her directorial debut on this new play by Anna Ouyang Moench about a Korean-American Christian youth group on a mission to Bangkok who discover Pastor isn't who they think he is. It's a brutal look at sexual abuse, harassment, and living under the male gaze, which is especially relevant in a time when hate crimes against Asian Americans, particularly women, are on the rise. See this funny, entertaining, thought-provoking, heart-breaking play through March 6 at Mixed Blood Theatre (click here for details).
The play takes place in real time, about 90 minutes of it, in a hotel room in Bangkok, with four teenage girls on a mission trip. The smart one Jen (Louisa Darr), the naïve one Samantha (Suzie Juul), the religious one Kyung-Hwa (Janet Scanlon), and the rebellious one Mimi (Dexieng "Dae" Yang) are all there for different reasons. One gets the sense that they weren't necessarily friends before this (in a hilarious and all too real scene, one of the girls is horribly offended to find out that the others don't "follow" her), but found themselves together in this situation. The situation being a hidden camera found in the bathroom, which they soon deduce must have been placed there by their beloved Pastor, the sole leader of this trip. All of the girls react to it in a different way, from wanting to kill him, to explaining it away as not that big of a deal. Each of the girls has a fantasy sequence in which they deal with the perp, including a silent fight scene as thrilling as those on Cobra Kai, but with less blood (choreographed by Annie Enneking). But dealing with your abuser in reality rarely lives up to the fantasy of revenge, and the ambiguous ending leaves us wondering what is next for these girls.
Katie Bradley does a great job in her first time directing, bringing out all of the sharp humor of the script, while allowing space for the varied and complicated emotions. She also deftly deals with the fantasy sequences, which are like little mini-movies within the play, the shift between reality and fantasy clear from lighting and sound cues (designed by Wu Chen Khoo and Katharine Horowitz, respectively). This talented young cast is so natural and believable, as they bicker and fight and make up with all of the drama and heightened emotions of teenagers. Rich Remedios plays all of the different fantasy version of the Pastor, as well as the complicated real one, a man with something to hide. The final scene features what feels like at least five minutes of silence as the girls pack up to go, an impressive feat because this room is about as messy as you would imagine a hotel room shared by four teenage girls would be. Yet everything - clothing, toiletries, stuffed animals, and emotions - gets packed up and out the door, the silence speaking volumes.
The onstage hotel room - two double beds, bedside tables and lamps, mini-fridge, neutral tones - looks very realistic and authentic (except for the blinds* on windows to the bathroom, but you'll see why that's necessary). The four girls are dressed in different character-defining clothing, from sweet to tough, and it's fun to see what else they've got in their suitcases, spilled out on the floor (scenic design by Sarah Bahr, costume design by Khamphian Vang).
As Artistic Director Lily Tung Crystal noted in her opening night post-show speech, one way to combat the fear and ignorance that can lead to intolerance, hate, and violence, is by sharing stories. For nearly 30 years, Theater Mu has been sharing Asian American stories like this one. While specific to the Asian American experience, Man of God also deals with universal themes, relatable to any woman who's ever experienced catcalling, an unwelcome gaze, or a feeling of danger while simply going about her day. The play also explores the appropriate or ideal victim response, when there really is no such thing. As dramaturg Jane Peña notes in the program, maybe surviving the trauma is enough, without putting any expectations on the survivor on how they should respond.
Man of God continues Wednesdays through Sundays through March 6. Visit Mu's website for information, pay-as-you-are tickets, resources, and a companion reading list.
*Update: I've been informed that blinds are a common design element in Thailand and other Asian countries, so it is authentic. Which works out well to be able to see what's going on in the bathroom.