"IN PERSON" by Emily Michaels King at the Crane Theater 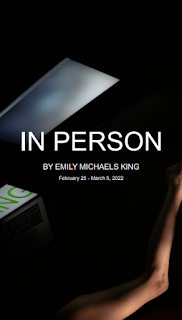 Almost exactly one year ago, multi-disciplinary artist Emily Michaels King presented one of the most innovative virtual performances to come out of #TCTheater during the pandemic intermission from live performances. DIGITAL was a highly technical use of various media and software (MacBook Pro, iPhone, Zoom, recorded videos, live videos, images, audio clips, text) that was also highly personal. Now, for two weekends only, Emily is presenting a companion piece called IN PERSON and performed live and in person at the Crane Theater. It truly feels like a continuation of what was begun a year ago, as if we're watching her create this feat of technical artistry that we experienced last year, and move beyond it. If you saw DIGITAL I highly recommend you continue the journey with IN PERSON, but it's not a prerequisite; IN PERSON can also stand on its own. Like all of Emily's work, this piece is extremely innovative, thoughtful, raw, vulnerable, powerful, inexplicable, and deeply moving.

IN PERSON is unlike anything else you'll see on stage, more performance art than what we traditionally think of as theater. That makes it a little hard to describe, so once again I'll let the artist do that: "IN PERSON is a multimedia performance by Emily Michaels King that uses a complex network of devices to examine parasympathetic freeze, survival, and reclamation. This distorted and intricate mixture of device pairing, screen mirroring, choreography, and projection is an endoscopic plunge into one’s internal hard drives, digital and otherwise, for proof of life and who we are despite it all. Performed solo alongside machine companions, IN PERSON thrusts flesh against RAW file and wires the virtual to the human."

Using a laptop, monitor, iPhone, projections on a large screen at the back of the stage, and a mass of cords and cables that I don't know how she keeps track of, Emily creates a virtual live experience. Like DIGITAL, it begins on her desktop (the most artfully arranged desktop I've seen), which can alternately (or concurrently) be seen on the laptop screen, the monitor, or projected larger than life onto the back of the space. The show begins in an unhurried pace as Emily sets up her space, and then slowly and hypnotically begins to move the curser around the screen, clicking on various icons, images, and videos, sometimes typing in text, sometimes playing audio clips of herself or speaking a short piece, but mostly in silence or with a haunting soundscape (sound design by Emily). She plays clips of familiar songs like Shania Twain's "That Don't Impress Me Much," Marc Cohn's "Walking in Memphis," and Huey Lewis' "The Power of Love," and then continues the exploration through repeated themes, images, and videos.

At times Emily is projecting a live video of herself onto herself, like parallel mirrors reflecting back on each other, until I'm not sure what I'm looking at anymore. She's both herself and a reflection of herself. She moves around the space, at times moving with wild abandon, at times slow and controlled. At one point she seems to birth a new version of herself, out of the darkness of the past few years and into the light. It's an extremely physical, grounded performance; we see parts of Emily's body in extreme close-up through the iPhone camera projected onto the large screen, as well as farther away in the reality of the physical space. The lighting design (by Joanna McLarnan) is really beautiful and an integral part of the show; it's difficult to know if the light is coming from one of the devices on stage or the overhead lights or emanating from the performance itself.

So what does it all mean? That's up to the viewer, and the post-show talkback provided lots of differing insight from that night's audience (there's another talkback after the pay-what-you-can performance on February 28, and on March 3). I found myself thinking about how these last two years have changed us, perhaps permanently. Changed technology, changed how we use that technology, changed how we are in relation to others, changed work, travel, art, play. Some things changed for the good, some not so good, and our job now is to sift through the mess and keep the helpful changes, let go of the harmful ones. This show also feels like a representation of this transition period that we're living in now, straddling the line between the pandemic isolation we've been living in for what feels like an eternity, and the return to normalcy that's on the horizon but forever just out of reach.

If you want to be challenged, mesmerized, and "gut-punched" (as came up several times in the talkback), check out one of the five remaining performances of IN PERSON, performed live (and virtual) in person at the Crane Theater in Northeast Minneapolis (click here for info and tickets).