"The Mousetrap" at Lyric Arts 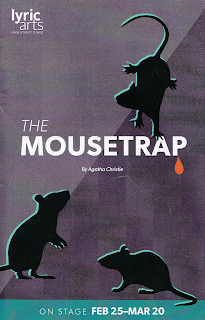 The world's longest running play has arrived in Anoka! Agatha Christie's murder mystery Mousetrap opened in London's West End in 1952 and has run continuously every since (not counting the covid intermission). Lyric Arts's new production opens this weekend, and it's delightful. I had never seen the play before, so I was in the wonderful position of not knowing whodunit, until the murderer was finally revealed to audible gasps from the audience. It's less scary than spookily fun, as the audience tries to figure out whom to trust and whom to suspect amongst these unique and specific characters who come together in a boarding house just outside of London. Christie's popular and well-plotted (if a few too many coincidences) story, along with this talented cast and spot-on design, make for an entertaining evening on a chilly Minnesota night.
The play takes place at Monkswell Manor, run by newly married couple Mollie (Isabella Dunsieth) and Giles (Nick Furlong) Ralston, on its opening weekend. The four scheduled guests begin to arrive as the snowfall increases, and the news reports a recent murder, with the murderer on the loose. There's the enthusiastic Christopher (Andrew Newman), the hyper-critical Mrs. Boyle (Miriam Monasch), the genial Major Metcalf (David Coral), and the confident Miss Casewell (Rachel Postle). The Ralstons get everyone settled into their rooms and prepare for being "snowed up," when an unexpected guest arrives - the eccentric Italian Mr. Paravinci (Raúl Arámbula). The mousetrap is about to be set (references to the nursery rhyme "Three Blind Mice" and the now haunting song explain the title).
Things start to get interesting the next day when the police call and say they're sending out a Sergeant Trotter (Sebastian Grim) for some unexplained reason. He soon shows up - on skis since the roads are impassable - and begins questioning everyone about their possible connection to the murdered woman, who is a recently released prisoner convicted of negligence and abuse that resulted in the death of her foster child. Everyone is acting suspiciously and seems to be hiding something, and there are so many clues and red herrings strewn about, that at one point or another I suspected nearly every character as being the murderer. Without giving away any spoilers, let's just say that someone amongst this motley crew is murdered, and someone is revealed as the murderer.
Craig Johnson, who knows a thing or two about spooky stories, having hosted Park Square Theatre's Theatre of the Macabre the last few years, directs the play with delicious tension and suspense, and also some humor to release that tension, whilst keeping all of the complex puzzle pieces moving and eventually falling into place. Everyone in this excellent cast, many of whom are new to the Lyric Arts stage, portrays their character's quirks and eccentricities well, in a way that hints at more beneath the surface.
The cast speaks with varied British (or Italian) accents that are fun to listen to (thanks to dialect consultant Keely Wolter), and are dressed in sharp character specific period clothing (Miss Caswell is wearing pants!), with a change of wardrobe since the action unfolds over two days. The set is a detailed representation of a dark but cozy living room in an old English country house. The multiple weapons hanging on the walls are appropriately menacing, and there are so many doors you'd think this was a farce - no less than five ways for murderers and victims to enter and exit the space. A pivotal and chilling moment happens in the dark, and it's remarkable just how dark this theater can get when all the lights are turned off (see also Wait Until Dark). (Costume design by Samantha Fromm Haddow, scenic design by Greg Vanselow, and lighting design by Shannon Elliott.)
Mousetrap won't run for 70 years at Lyric Arts, only a month. So make your plans to escape the snowy winter for a few hours with this snowed up mystery, and be glad that you don't have to stay the night at Monkswell Manor but can leave once the murder is solved, either satisfied that you figured it out, or surprised at the outcome (click here for info and tickets).