"Copenhagen" by Melancholic Anonymous at the Crane Theater 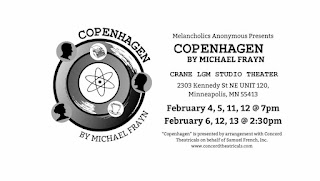 New #TCTheater company Melancholics Anonymous came out of St. Olaf shortly before the pandemic. What a time to start a theater company! But maybe because they are new, and young, they were able to quickly adapt to the virtual theater world and produce some really great virtual productions (e.g., Good Grief and On Air: The Wuppet Time Murders for the 2020 and 2021 Minnesota Fringe Festival). I saw them live for the first time last night, a production of the 2000 Tony Award-winning best play Copenhagen. In the intimate space of the Crane studio theater, this three-hander (if that's a term) that speculates about the real-life 1941 meeting between scientists Neils Bohr and Werner Heisenberg (both of whose worked contributed to the development of the atomic bomb) is a wonderful exploration of science, philosophy, and morality. Copenhagen continues at the Crane Theater in Northeast Minneapolis through February 13 only.

Copenhagen is essentially a memory play, with the three characters - Heisenberg (Collan Simmons), Bohr (Kjer Whiting), and his wife and collaborator Margrethe (Clare Boyd) - ruminating on that fateful and mysterious meeting from somewhere outside of time and space. It's also a play about memory, how three people can remember the same event differently, and how our memories change over time until we don't know what's real anymore. We see Heisenberg's 1941 visit to the Bohrs' home in Copenhagen play out a couple of times, as our character try and try again to get at the truth of what transpired. We also hear the background of when they met, and how Heisenberg was a trusted student and family friend before the war and the Nazi occupation of the Bohrs' native Denmark, while Heisenberg remained loyal to his native Germany, fractured the relationship.

What actually was Heisenberg's reason for visiting Bohr, and what actually happened? Scholars continue to debate the issue, and playwright Michael Frayn doesn't give us any clear answers. Was Heisenberg loyal to the Nazis and trying to find out from Bohr if the Allied scientists (many of them Jews who had fled Europe) were close to developing a nuclear weapon? Was he purposefully slowing down the German research into nuclear weapons to keep it out of Hitler's hands? Or was he simply wanting to discuss the ethics of science and the responsibility of scientists with his friend and mentor? All possibilities are discussed in this smart, talky, sciencey play. But don't be intimidated by the science; even though I flirted with the idea of being a physics major, that was nearly thirty years ago, so my physics knowledge is seriously lacking. But it's not necessary to understand this play, which lays out the science in a fairly accessible way (the two men often say something like, "as if you're explaining it to Margrethe," but she just rolls her eyes at them because we all know she's as smart as they are). And anyway the details of the science don't matter for this story, it's the morality of what you do with it that's at the heart of the piece (I was reminded of another play that deals with the morality of science that I saw in this same space - Swandive Theatre's The Canopic Jar of My Sins). 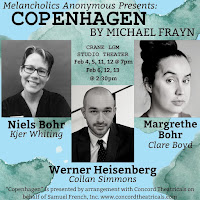 Melancholics Anonymous co-founder Timothy Kelly directs the strong three-person cast in the intimate space of the studio theater, with the audience seated in a single row around a square. Three chairs and a table are all that populate the space, with a few period-specific props. The cast is dressed in somber period clothing, and the black floor becomes a chalkboard upon which to illustrate the science and geography. The Crane's secondary performance space is great for this kind of raw, intense, up-close-and-personal theater, where you almost feel like you're eavesdropping on this long fascinating conversation as it's happening. There's nowhere to hide (although there are some nice lighting effects for emphasis), and the three actors do a fantastic job both with the plentiful dialogue as well as the relationships and emotion between the three characters.

I often say that my favorite kind of play is the two-people-sitting-in-a-room-talking kind of play, and Copenhagen is a great example of that, only with three people, and it's well executed by this cast and creative team. In a time when we've lost too many companies and artists, it's heartening to welcome a new, intrepid, ambitious young company like Melancholics Anonymous. Click here for more information on Copenhagen and to purchase tickets for one of the four remaining performances.