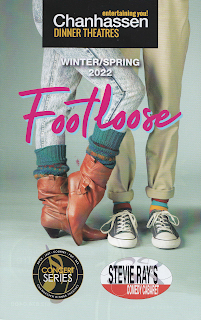 Chanhassen Dinner Theatres is back with their first show created after the long pandemic intermission of 2020-2021. After their 2020 production of The Music Man was finally able to return last summer and continue through January, the Chan is turning the page to Footloose, the adaptation of the classic '80s movie. While it's not my favorite musical, being both a movie adaptation and a (partial) jukebox musical, this production makes the most of the material and is a super fun time at the theater. As always at the Chanhassen, every element of production is smooth and professional, the music and dancing are fabulous, and the cast is top notch. It's nearly impossible not to have a blast at the Chan, and this Footloose is pure entertainment from start to finish. The show will continue through the summer and into September, but weekends are already starting to sell out and summers are always busy, so make your plans now to cut loose in Chanhassen.

For those of you who haven't seen the movie in a while (like myself), here's a brief plot rundown: single mother Ethel and her teenage son Ren move from Chicago to the small town of Bomont to live with her sister and brother-in-law. Reverend Shaw preaches the evils of the world, and along with fellow city council members has outlawed dancing in response to a car accident that killed four teenagers on their way home from a dance. He keeps a tight rein on the town, but less so his daughter Ariel, who frequently sneaks out of the house to go out with her bad boy boyfriend. Ren feels stifled in the small town, and goes on a mission to convince the city council to allow dancing. After a heart-to-heart with the Reverend, he relents, and the community is healed by the power of music and dancing.*

This 1998 stage adaptation of the 1984 movie feels a little dated, and there are some problems with the book - the female characters are underwritten (I still don't want to hear women singing about "Learning to be Silent"), there are a couple of instances of domestic violence that are never satisfactorily addressed, and the resolution at the end comes a little too easily. But seeing the show at this time, I couldn't help but notice that the themes of censorship, book banning, religions zealots trying to impose their morality on others by legislating what they can do with their bodies, and young people protesting for their rights are all incredibly timely. Not that this production necessarily highlights those themes, but they're there if you look for them. Footloose shows us the dangers of trying to use censorship to protect us from what we're afraid of, instead of dealing with those things with openness and honesty.

The large and talented cast is full of old favorites and new, and is the most diverse cast I've ever seen on the Chanhassen stage, the result of a long overdue assessment of diversity, equity, and inclusion, and representation. This feels like a more accurate and inclusive representation of the world we live in. The younger generation is the star of this show, beginning with the couple at the heart of the story. Alan Bach (whom you may remember from Newsies) is so charming as Ren, with the voice and the moves to carry the role. He's well matched with #TCTheater newcomer Maya Richardson, possessing a gorgeous voice and a calm and confident stage presence. A musical highlight of the show is their exquisite duet on "Almost Paradise," their voices blending and complementing each other so beautifully. Bringing much of the comedy are Shina Hey, effervescent as Ariel's friend Rusty, and Matthew Hall as the sweet and adorably simple Willard. The adults aren't bad either, including Michael Gruber, showing us the pain behind the Reverend's impossible rules, making the character sympathetic despite his initial closed-mindedness; Lynnea Doublette with a strong performance as his wife; the always great Ann Michels as Ren's mom; and too many cameos by faves to mention.The score of the musical is a combination of familiar songs from the movie (highlights being "Let's Hear It For The Boy," "The Girl Gets Around" featuring Ben Bakken's vocal gymnastics, and of course the title song), and new songs written for the stage, some more successful than others, the best being "Mama Says." They of course all sound fantastic as performed by this cast and music director Andy Kust's eight-person on-stage-behind-the-scrim band. The choreography by Renee Guittar, making her CDT debut as a choreographer after appearing in many shows, is full of energy, freshness, youth, ingenuity, and joy. Footloose is all about the dancing, and the choreography and performances by the entire ensemble couldn't be better (who knew theater kids could dribble basketballs with such rhythm and precision?!). I love a show with post-curtain call dance numbers, and this one has several, including something quite unexpected and thrilling.

Artistic director Michael Brindisi is such an expert at directing in this space, making use of every corner of the multi-level stage, placing everyone in the large ensemble exactly where they should be, and pacing the show so that it never lags, but flows smoothly between action and quieter moments. The floor of the stage is painted like a road going off into the horizon, with scaffolding on the far sides of the stage. Set pieces are smoothly moved on and off stage and include a detailed kitchen wall, the drive-in tables, school lockers, and adorable little half-cars and half-motorcycles used in some of the dance numbers. The cast is dressed in those fun '80s fashions that we love - high-waisted jeans, poufy sleeves, big hair, and of course Red's signature red converse tennis shoes (scenic design by Nayna Ramey, costume design by Rich Hamson.)

The super fun, fantastic, diverse, and joyous Footloose continues Tuesdays through Sundays at Chanhassen Dinner Theaters. Click here for info and tickets (pro tip: go on a weeknight or matinee for lower prices and better availability).

*Plot summary borrowed from my review of the 2019 production at Artistry.