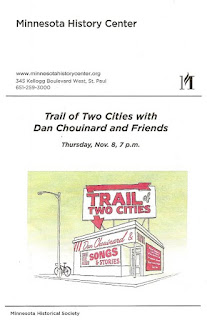 I love history (especially Minnesota history), and I love music. So the recent event at the Minnesota History Center*, Trail of Two Cities with Dan Chouinard and Friends, was just my kind of thing. I became familiar with talented pianist/accordionist/storyteller Dan Chouinard years ago through the dear, departed, MPR Morning Show, and have seen him in many concerts since, including his Cafe Europa show (about his adventures bicycling around Europe with an accordion) and Steerage Song (last summer's collaboration with Theater Latte Da). In Trail of Two Cities, Dan brings his music/storytelling format to these two beautiful cities we call home, and more specifically, to how we travel between them. Dan travels by bicycle as much as possible, which I hugely admire and envy. He encouraged the audience to bring the mindfulness necessary when traveling through the city by bike to however we travel. There's a reason the roads we travel on are where they are. The show reminded me a little of The History Channel's series How the States Got their Shapes, only with local landmarks like the crosstown (a way for livestock trucks to bypass the city) and University Avenue (an old Native American trail from the falls of St. Anthony to the bend in the river).

In addition to learning lots of fascinating tidbits about local history, complete with period photos and paintings, Dan and Friends also provided music to accompany the stories. Dan's talented Friends include several members of the Guy's All-Star Shoe Band, "old-time musicians" husband and wife duo Kim and Quillan Roe, and talented vocalist Prudence Johnson. Train songs, truck songs, river songs, the music covered every mode of transportation used in the history of these Twin Cities. Modes of transportation and related songs include:

It was a fascinating trip through local history that made me want to learn more. It also made me want to move from the suburbs into the city so I could make use of the growing public transportation (the streetcars return!). The show reminded me of my desire to take the train to Chicago for a theater weekend, and float down the Mississippi to New Orleans on a riverboat. I'm not sure if the latter even exists, but the former definitely does, and especially now that the Amtrak is moving back to the newly renovated historic Union Depot in St. Paul, I'll be sure to do that soon. Thanks to Dan and Friends for exploring the ideas of local travel in such an entertaining and musical way!


*The Minnesota History Center's auditorium is a nice venue (I'd previously seen a History Theatre production 1968 there), and it's a great museum. I've been wanting to see their current exhibit on the US-Dakota War of 1862 and was hoping to go that afternoon and make a day of it, but unfortunately they closed the center between museum time and event time. I'll have to go back another time, perhaps in conjunction with another event.