"Juno and the Paycock" at the Guthrie Theater 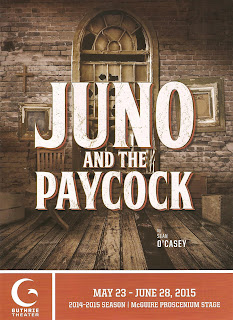 Ah, Ireland. Such a beautiful country, a land of endless music, rolling green hills, and waves crashing upon the shore, but with such a complicated and tragic history. Yet the unique spirit of the Irish people perseveres. How fitting, then, that Joe Dowling, proud Irishman and leader of the Guthrie Theater for the past 20 years, chose an Irish play as the last one he will direct in his tenure at the Guthrie. And what a play; Seán O'Casey's Juno and the Paycock, set during the Irish Civil War of the early 1920s, is as beautiful and tragic as Ireland itself.

Juno and the Paycock premiered at Dublin's Abbey Theatre (of which Joe Dowling was Artistic Director in the '70s and '80s) in 1924, just a few years after the Irish Civil War, when wounds and divisive opinions were still very fresh and raw. That's pretty revolutionary. It tells of the effects of the war and extreme poverty on one family in Dublin. Beleaguered and overworked Juno, her proud buffoon of a husband Jack (say "peacock" with an Irish accent and you have the title), and her two adult children live in a run-down room in the cramped, cold, and crowded tenements of Dublin. Juno works to keep bread and tea on the sorry table, and Jack avoids work by claiming pain in his legs so that he can drink, eat, and talk with his buddy Joxer. Son Johnny was injured in the recent wars and rarely leaves the house, while daughter Mary hopes for a better future for herself. She brings home her beau Charles, who has some surprising and life-changing news for the family. But the Boyles are not a family to whom good things happen, and their momentary hope and happiness doesn't last. Johnny gets caught up in the after-effects of his time in the service, Mary faces a crisis of her own, and Juno must make a choice. It's devastating to watch this family struggle, and one can only hope that some of them make it out.

Joe Dowling brought in three acclaimed Irish actors to play some of the leads, and as much as I love our local acting community, I can hardly blame him for that. They're all wonderful and lend an air of authenticity to this very Irish story. As the title characters, Anita Reeves and Stephen Brennan are so natural, believable, and likeable, even when they aren't. Anita's Juno is the strong, no-nonsense, loving matriarch of her family, the only thing keeping them going. Stephen makes the "paycock" Jack a loveable lout of a man, charming and funny and infuriating. Tony nominee Dearbhla Molloy has a brief but powerfully memorable scene as a grieving mother. But despite these new faces, this still feels very much like a Guthrie show thanks to the inclusion of Guthrie long-time favorites like Sally Wingert (stealing scenes as the busybody neighbor) and Mark Benninghofen (hilarious as drunken buddy Joxer), as well as newer favorites like Katie Kleiger (appealing and fresh-faced as the hopeful young Mary), David Darrow (in a devastating performance as the one-armed war-damaged son Johnny, so physically contorted that I hope he has a good chiropractor), and Casey Hoekstra (Mary's charming suitor).

The set and costumes are essential to setting the scene in the slums of Dublin. The set (originally designed by Frank Hallinan Flood, executed for the Guthrie by Michael Hoover) consists of a huge high-ceiled room that was once great, but has fallen into disrepair, with cracks and stains covering the walls. Appropriately shabby furniture and props fill the lived-in space. Christine A. Richardson's costumes are also shabby and worn, but neat and polished for some characters if called for. Projections on the lowered curtain before the show and between acts give a brief history and perspective for the story.

In this play as in all things Irish, there is humor and music to temper the tragedy. One of the most entertaining scenes is when the family takes turns singing; one feels that music is the thing that gets the Irish people through, which is beautifully illustrated in this scene. I found myself drawing parallels between this play and the one I had seen the previous night, The Gospel of Lovingkindess at Pillsbury House Theatre. Are the slums of 1920s Dublin that different from the projects on the South Side of Chicago? Different circumstances perhaps, but inequality, prejudice, poverty, and tragic loss of young life exist everywhere in the world.

Joe Dowling has been the Artistic Director of the Guthrie Theater for 20 years, and I have been a subscriber for 12 of those years. I can't even really say what he's changed and brought to the theater (other than the obvious, the big beautiful blue building on the river) because I don't know a Guthrie without Joe. His final two shows, the American epic The Crucible, and this very Irish story Juno and the Paycock, are a beautiful way to conclude his time with us. The Guthrie will honor and celebrate Joe's accomplishments in the last 20 years with a gala performance called All the World's a Stage this Saturday. I wouldn't miss it for the world! (Juno and the Paycock continues through June 28.)