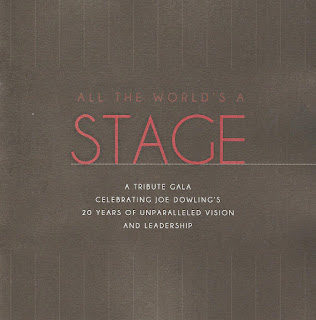 The Guthrie Theater knows how to throw a gala. The 50th Anniversary Gala two years ago is one of my favorite theater memories, with amazing performances by many local and national favorites in celebration of 50 years of this national treasure of a theater we Minnesotans are lucky enough to call ours. Last Saturday night the Guthrie held another gala, and instead of just a general feeling of appreciation for the community, all of the respect, honor, and love was directed towards one person, Joe Dowling. Joe is resigning from his position of Artistic Director after 20 years (12 of which I have been a season subscriber), during which he oversaw the move from the original theater to the big blue beautiful building on the river and co-founded the Guthrie/U of M BFA program along with many other accomplishments. He is the longest tenured Artistic Director in Guthrie history (surpassing the previous holder of that record, his predecessor Garland Wright, by 11 years) and the most consistent leadership in the Guthrie's 52 year history. In that time he has worked with hundreds of theater artists, many of whom were on hand to partake in the celebration. The 90-minute performance included over 70 actors and showcased a dozen of the over 50 plays and musicals that Joe has directed in his tenure at the Guthrie, plus original musical and dance performances. But even more than the many wonderful mini-performances we were treated to was the overwhelming feeling of love, gratitude, and respect for this theater, this community, and the man who has helmed this theater for so many years. It was a truly magical night.

If you weren't there, here's a summary of the wonderful things you missed:

Have you ever watched the Kennedy Center Honors, in which great artists are honored by the president and performances from admiring proteges? That's what this felt like. From where I was sitting, I could see Joe sitting on the center aisle about halfway up, just beaming. He came onstage after the final number to give a few brief words, in which he credited Tyrone Guthrie and the other previous Artistic Directors, as well as all the actors who've worked at the Guthrie beginning with Hume Cronyn and Jessica Tandy in the inaugural season, through Barbara Bryne (who, at 86, was there but in the audience rather than onstage), through the 70+ actors surrounding him onstage. It was such a love fest, and such a thrill to see so many artists whom I love, respect, and admire in one place, Joe Dowling chief among them.

But wait, that's not all! The evening continued with champagne (in real glasses!), dessert, music (the Minnesota Jazz Orchestra set up just in front of the endless bridge), and mingling. I had the chance to talk to so many of my favorite artists, some of whom I'd met before, some of whom I met for the first time. But there were many I didn't dare approach because they're just too intimidatingly amazing. I could have stood there gawking at the crowd all night and basking in the glow of this amazing theater community.

Here are a few photos from the after-party; I'll add more photos as they become available. Also check out my live twitter feed from the event @cherryandspoon.