"God of Carnage" at Lyric Arts 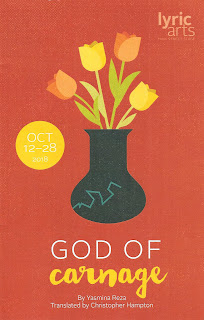 In 2009, God of Carnage won the Tony Award for best play. It closed in 2010, and the Guthrie produced it the following year, when I called it "a tightly wound, intense, darkly hilarious four-person play about what happens when our baser natures come to the surface." I still have vivid memories of it (which is noteworthy, considering I've seen over a thousand plays since them). It's a treat to revisit this smart, sharp comedy again in a well done production at Lyric Arts. The strong four-person ensemble is a great team, director Scott Ford has paced the 90-minute four-way conversation well, and the design tells us immediately where we are and who we're dealing with. To my knowledge, no #TCTheater has done this play since the Guthrie in 2011, so kudos to the little community theater in the 'burbs for tackling this prickly and sometimes unpleasant (in a good way) play and doing it so well.

God of Carnage plays out in real time over 90 minutes or so in the NYC apartment of Veronica (Katie Wodele) and Michael (Don Maloney). They have invited another couple, Annette (Jamie White Jachimiec) and Alan (Bill Williamson), over for a civilized discussion after an altercation between their sons. It seems the latter's son hit the former's son in the face with a stick, knocking out two of his teeth. They meet to discuss what to do about it and how to resolve the situation. But of course it's not really about the children, it's about the parents, and as the time goes on (and coffee gives way to rum) they each let down their pleasant company facade and let the truth fly with all the ugliness that often entails. Conflicting parenting styles and world views collide, as alliances between the four are made and broken. Needless to say, they don't ever get around to solving their children's problem, and instead find they have even bigger problems to deal with. The reason this "people behaving badly" play works is that each of the characters has humanity and depth, so that maybe you can empathize with one or more of them, even as you're horrified by their words or actions. Because being human is messy, and most of us don't have things figured out as much as we pretend to.

The moments the lights come up on the chic and modern apartment, you know exactly who these characters are thanks to their costumes. Alan and Annette are dressed in sharp classic business wear, while Michael and Veronica are more casual chic. Each looks very put together in a unique way, a look that deteriorates throughout the conversation until everyone and everything is a mess. There are some special effects that I won't go into, as well as props being thrown around, and it's all pulled off beautifully. (Scenic design by Joe Black and Brian Proball, costume design by Lucas Skjaret, and properties design by Cory Skold).

You also know exactly who these characters are thanks to the spot-on portrayal by this terrific cast. This is a true ensemble piece; each actor has to carry equal weight and they all do so effortlessly. Each actor gets their moment (or three) to break down and lash out, but the way that they're all totally in the moment even when off to the side observing is almost more impressive. While each gets to leave the stage for brief moments throughout the 90 minutes, the momentum of the escalating tension never stops, as the ball is passed continually between the four and never dropped.

God of Carnage is a smartly written dark comedy that's beautifully executed by the team at Lyric Arts. It's slightly dated in terms of one character (only) who has a cell phone with removable battery and sim card (remember those?), but in a way it's even more relevant today than when it premiered nine years ago. We've perfected our facades through the use of social media, where we present our best (and least real) self. This play digs beneath that false surface. It'll make you laugh, it'll make you cringe, it might even make you recoil in disgust at times. In other words, it's a fun night at the theater. But it plays through next weekend only, so make your plans to head to Anoka soon (which I hear is the Halloween capital of the world, so October is not a bad time to visit).