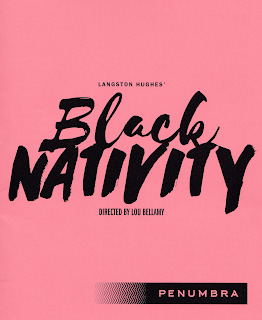 Another holiday* tradition is back this year - Penumbra Theatre's joyful production of Langston Hughes' Black Nativity. They've been doing this show for over 30 years now, and this version is very similar to what I saw three years ago. It's a wonderful tradition that fills the soul; recommended if you've never seen it before, or if you've seen it a dozen times. Continuing through Christmas Eve at Penumbra Theatre in St. Paul.
Read more »

Broadway Tour of "Fiddler on the Roof" at the Ordway Center 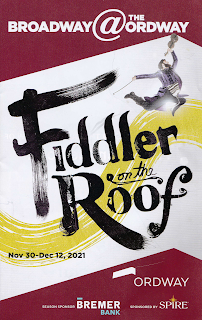 Broadway is back at the Ordway Center for the Performing Arts in beautiful downtown St. Paul! The first of their four-show season of touring productions (hopefully they'll add in their fantastic original productions next season) is Fiddler on the Roof. This revival premiered on Broadway in 2015, and has played in the Twin Cities before, but this is my first time seeing it. The last time I saw Fiddler was the 2019 Off-Broadway Yiddish production, which felt like how it was always mean to be (although the musical was originally written in English, it was based on Yiddish stories). Barring the language, this touring Fiddler is also about as authentic as it gets. Featuring fresh new choreography that still honors the iconic original, an incredibly talented cast largely composed of Israeli and Jewish performers, and a brilliant and beloved score, this story of a man and a family struggling to hold on to their traditions and identity in the midst of modern advances and persecution is more moving than ever. While not explicitly a "holiday" show, Fiddler represents all of the ideals of this season - family, tradition, community - and would be a great choice for a family, friends, or solo outing. But hurry, it's only here for two weeks before Tevye and his family pack up and head to the next town (click here for info and tickets).
Read more »

"All is Calm" by Theater Latte Da at the Ritz Theater 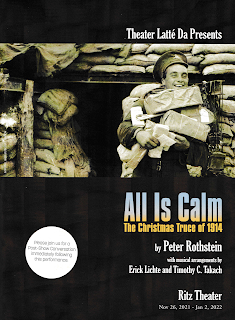 Theater Latte Da's first full production in their 24th season is the annual favorite, All is Calm. I've seen it eight times now, and it never fails to move me, in fact it continually finds new ways to move me. Peter Rothstein created the piece about a dozen years ago, and it has morphed throughout the years, eventually being whittled down to its current concise and practically perfect 65-minute form. The story alone is inspiring - the Christmas Truce of 1914, when soldiers on both sides put down their weapons for a spontaneous truce in the beginnings of WWI. And this piece of music-theater, which combines period songs with historical text from letters, journals, and newspaper articles, is simply the most powerful way to tell the story that I can imagine. It's told with such precision, thoughtfulness, and economy; every word, every gesture, every note rings true and has meaning. All is Calm is truly my favorite #TCTheater holiday* production because it conveys what I believe is the core meaning of this season - peace, stillness, reflection, community, and connection.
Read more » 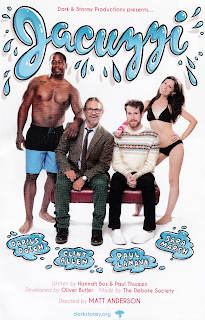 If you're looking for a palate cleanser to all of the holiday fare in #TCTheater this year, which can often skew towards the sickly sweet, look no further than Dark and Stormy Productions, which returns to the stage, er, hot tub, with the kind of dark comedy that has become their trademark. In Jacuzzi, the story of a couple of con artists preying on a gullible and dysfunctional father/son duo plays out over 100 minutes or so in and around an actual jacuzzi filled with actual water. It doesn't get much more site-specific than that. This is a great time of the year to visit lovely river-side Stillwater for holiday shopping, dinner at one of the numerous great restaurants, and some great and intimate theater (continuing through December 19).
Read more »

"It's a Wonderful Life" at Lyric Arts 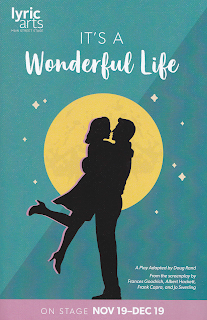 The 1946 film It's a Wonderful Life has become one of the most beloved Christmas* movies of all time. And now you can see it come to life on Lyric Arts' Main Street Stage in lovely downtown Anoka. The adaptation by Doug Rand is very faithful to the movie; it almost plays out scene by scene. It feels a bit long and slow-moving at times (the many scenes that make up someone's life story don't cut together quite as quickly on stage as on film), but the large and talented cast really make these characters their own, while having a lot of fun with accents and these familiar lines. Most importantly, the beautiful and important message that "no one is a failure who has friends," that every person's life is impactful and worthy no matter what their accomplishments or net worth, shines through.
Read more » 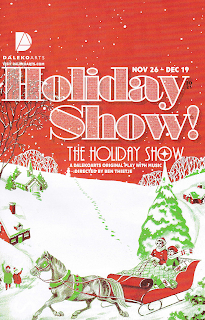 A local theater fan arranges for all of their favorite actors to come to their home under false pretenses, locks them in, and orders them to create and perform a new holiday* show. No, I'm not describing my pandemic fantasy, this is the plot of DalekoArts' return to the stage after a 21-month extended intermission (during which time they produced an all-virtual subscription box season called "Daleko Home Invasion"). The new original comedy Holiday Show! the holiday show is a ridiculous and loving ode to theater, the holidays, and being together. In other words, it's perfect for this odd and lovely season we're living in. Holiday Show plays weekends through December 19 in charming historic downtown New Prague, just a quick jaunt over the river and through the woods (and farm fields). Their programming is always worth the drive, and their 10th season looks to be a great one, continuing with the "hilarious and heart-breaking" play Lone Star Spirits, and the second regional production of the eight-time Tony-winning musical Once. If you've not been to New Prague lately, now is a good time for a visit (click here for info on the season).
Read more » 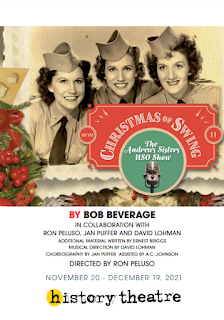 #TCTheater loves its holiday* shows, and my very first this year (not counting Annie, which is holiday-adjacent) is History Theatre's remount of their original musical Christmas of Swing, which I first saw in 2013. They've updated it this year to reflect the greater diversity of soldiers who served in WWII, making it more poignant and powerful than ever. But it's still highly entertaining, featuring Minnesota's own original girl group The Andrews Sisters, singing WWII era songs both Christmassy and not. The large and talented cast does a wonderful job of bringing this music and these heart-warming and heart-breaking stories of WWII soldiers to life.
Read more » 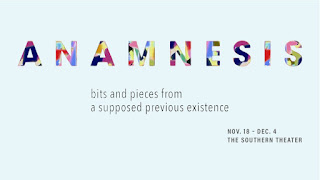 Two years after their last live show (during which interval they produced a charming, funny, and profound little web series called Liberty Falls 2020), the Moving Company is back on stage where they belong. As I found my seat in the nearly full-to-capacity vaxxed and masked crowd at the Southern Theater last night, and saw the black tarp-covered object filling the space under the historic arch, I had no idea what I was in for. But after ten years of experiencing this company that is the descendent of the famed Tony-winning Theatre de la Jeune Lune, I knew it would be unique, inventive, and, yes, moving. Anamnesis is all that and more (continuing at the Southern Theater through December 4).
Read more » 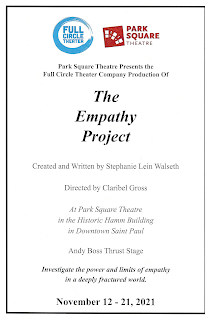 During this very long extended intermission from live performance, Full Circle Theater Company continued development of new works, including a play called The Empathy Project. They held several zoom readings, and now it's finally on stage in a full production. Having seen and appreciated the zoom version, it's wonderful to see what it has grown into in this fully staged version of the piece. Playwright Stephanie Lein Walseth interviewed 20 people across the state of Minnesota, looking for a good representation across politics, geography, and race. She asked people about their family story, their values, what empathy means to them, and their hope for the future. All of these stories are beautifully woven together, with the interviewees embodied by a talented nine-person cast, to create an inspirational tapestry of humanity that reminds us that behind all the rhetoric, we're much more similar than we thought we were. If you need a little more empathy in your life (and who doesn't right now?), see one of the few remaining performances of The Empathy Project at Park Square Theatre, closing November 21.
Read more » 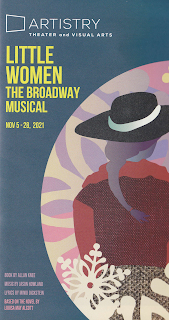 After cancelling their originally scheduled opening weekend due to a positive COVID test in the vaccinated cast (statistically speaking, this was bound to happen somewhere amongst the many shows in production right now, even with a low breakthrough rate), Artistry finally opened their production of Little Women: The Broadway Musical. Louisa May Alcott's classic story of four very different but loving sisters has stood the test of time and many adaptations. While this is not my favorite adaptation of the story, it's still a heart-warming tale, and the talented cast and creative team make the most of the material.
Read more » 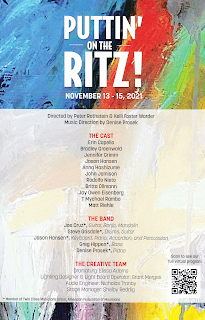 After 611 long dark days, Theater Latte Da is finally back performing again in their Northeast Minneapolis home, the Ritz Theater. They opened their 24th season last weekend with a special cabaret concert for subscribers (and me!) and it was such a joyous celebration. I've missed Theater Latte Da's brand of music-theater so much, and am thrilled that they're finally back. The first official show of the season is a remount of their gorgeous annual holiday show All is Calm (seen on PBS stations around the country last year), to be followed by La Boheme in January, nearly two years after the production was shut down after just a few preview performances. Next spring we'll see the area premiere of the 1992 multiple Tony-nominated musical Jelly's Last Jam, and the season will conclude with the world premiere of a new musical adaptation of the classic play Twelve Angry Men, which Latte Da has been developing for several years. Click here for info on their season and to purchase season tickets, or individual tickets for the first two shows, and read on for highlights of last weekend's Puttin' on the Ritz.
Read more » 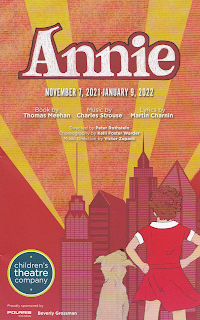 A healthy dose of optimism is exactly what I needed last Friday night, when it seems like coming out of this pandemic is one step forward and two steps back, on top of all of the other problems the world is facing right now. And optimism is exactly what Children's Theatre Company's production of Annie delivers, in spades. Ten years later, they're remounting their 2011 production with most of the creative team and even some of the cast returning. It's the first live performance at CTC since their original play Spamtown, USA closed early due to the pandemic 20 months ago, and it's a joyous return. Despite being written in the '70s and taking place in the '30s, Annie clearly resonates with 2021. People living in poverty struggling to survive while others live on "Easy Street," and bad feelings towards a former president who left us with mess to clean up, are stories that could've been pulled from today's headlines. Annie shows us the power of "Little Girls," at a time when we're looking to the younger generations, and women of all ages, to lead us out of today's challenges and into a better "Tomorrow."
Read more »