"Spring Awakening" by Theater Latte Da at the Rarig Center 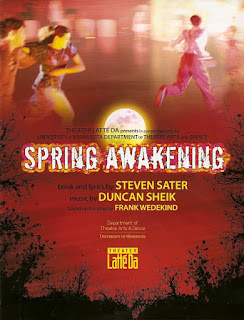 Warning: this is not an unbiased review.  Theater Latte Da is my favorite local theater company, I think everything Peter Rothstein touches is gold (this: "Peter Rothstein is one of the premiere directors of musical theater in the country and I live in terror that an evil Broadway producer will swoop down and snatch him away from us.*"), and Spring Awakening is one of my favorite musicals (I saw it on Broadway with most of the original cast, and twice on tour, and I have a kitty named Moritz Stiefel).  So I was predisposed to love this production, and love it I did.  But it seems that I'm not alone in that feeling (see the many glowing reviews from real theater critics), so you can rest assured that I am not leading you astray when I say that if you're a fan of music and theater, go see this show (playing now through May 6 at the Rarig Center on the U of M West Bank Campus).  And really, if you're not a fan of music and theater, why are you reading this?  ;)

The eight-time Tony-winning Broadway musical by Steven Sater (book and lyrics) and Duncan Sheik (music) is based on an ahead-of-its-time German play by Frank Wedekind (Frülings Erwachen for my fellow German nerds).  It was written in the late 19th century but rarely produced at the time because Wedekind so explicitly and realistically examined the sexual awakening of teenagers in a repressed society, and "the opposition children encounter from their elders just when they need openness and understanding, and how the way adults treat them will determine their future course" (Carl R. Mueller in a note in the playbill).  More than 100 years later this ground-breaking play was combined with modern pop and rock music to great the ground-breaking musical.  Our heroes are the teenage lovers Melchior and Wendla, and Melchior's best friend Moritz, who don't have the information they need to handle the issues they face, which has dire consequences for all three of them.  And not surprisingly, Peter Rothstein has found the perfect Twin Cities actors to portray these roles.
﻿
Cat Brindisi proved last fall in Theater Latte Da's Spelling Bee that she is not a star because of nepotism (her parents are Michael Brindisi, Artistic Director of the Chanhassen Dinner Theatres, and busy and talented actor Michelle Barber, who also plays her mother in this show), she's a star because she's an incredible talent in her own right.  She's really the heart and soul of the show as Wendla, the wide-eyed and curious young girl who learns about life the hard way, because no one will tell her the truth.  Unfortunately for us she's moving to NYC to find her fortune.  I wish her the best and I will go see her on Broadway, but I wouldn't mind seeing her come home to do a show every now and then.

Melchior is that kid who's too smart for his own good.  Always questioning, always thinking, he's got it all figured out.  But unfortunately the world he lives in doesn't allow for new ideas, and he learns a harsh lesson about reality.  David Darrow again gives an intense and moving performance (having played one of two teenage boys who fall in love in Latte Da's last show Beautiful Thing), and this time we get to hear his beautiful voice too.
﻿
I first saw Tyler Michaels when he stole the show as Snoopy in You're A Good Man, Charlie Brown at BCT earlier this year, and was happy to find out he'd be taking on the role of my poor sweet Moritz.  He brings his amazingly physical style of acting to this role and makes it completely his own - leaping in the dance numbers, jumping over chairs in scenes, and climbing around the stage as he sings one of my favorite songs, "Don't Do Sadness."  He said in the post-show discussion that he lets the emotions reside in his body as a way to better feel and portray them, and it shows in the most wonderful way.

Two actors portray all of the adult roles in the show, mostly teachers and parents, and most of them not very likeable (Melchior's mother seems to be the one kind and sensible adult).  The aforementioned Michelle Barber and James Detmar do a wonderful job at creating multiple distinct characters in very short scenes.  The ensemble is largely made up of U of M students, and really, who better to cast as a bunch of teenagers than theater students?  They're young and hungry with their whole lives in front of them, just like these kids with great German names like Ernst and Ilse.  Eager to learn, they're learning from the best in this production.  And they have fantastic boundless energy that fills the thrust stage.

The Tony-winning score sounds amazing in the hands of the five-piece onstage band led by Denise Prosek.  The choreography by Carl Flink (Chair of the U of M's Theatre Arts and Dance department) is really cool and unique, so organic to the characters and the music.  As he and the cast talked about in the post-show, the dancing is these characters' bodies speaking in a way that their words cannot in their strictly regimented world.  It's somewhat reminiscent of the Broadway choreography (which he's never seen), but is it's own thing entirely (gone are the hand-held microphones, opening up more opportunties for movement).  I particularly loved "The Bitch of Living," with the boys dancing on and around chairs and leaping through the air, hoping someone will catch them (when it was over I wanted to rewind and watch it again!), as well "Totally Fucked," in which all of the kids run around and literally get in the audiences faces.  It's all youthful energy and passion with nowhere to go but into the dance.

I chose this production of Spring Awakening for an annual event I plan for my friends called "girls night out at the theater."  I love this musical so much, and I knew Latte Da would do a fantastic job, that I wanted to share it with as many people as possible.  I don't often tell people "you must see this show."  But I'm telling you, you must see this show.  There are plenty of seats available (I know because I just ordered tickets to see it again), so get them before they sell out as word spreads!  This is a show not to be missed.  If you don't believe me and the dozen other reviews, see for yourself:

Peter Rothstein and Theater Latte Da's year-long experiment in focusing on youth-oriented productions was a resounding success in my eyes (see The 25th Annual Spelling Bee, about a middle school spelling bee, and Beautiful Thing, about two teenage boys falling in love in working class London).  It provided opportunities for up-and-coming musical theater actors that will hopefully convince them to stay here, and continue to enrich this amazing theater community.  And I can't wait to see what Theater Latte Da will do next year, which will hopefully announced at a lovely outdoor concert at Lake Harriet this summer.

I enjoyed your review: here are my thoughts on the show: http://youngthespian42.blogspot.com/2012/04/day-17-spring-awakening.html

hi will, thanks for the link. i enjoyed reading your review as well. i'm not as knowledgable about the technical aspects of theater so it was an interesting perspective.