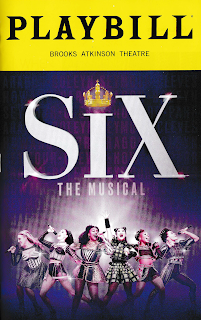 Summary: The six wives of Henry VIII tell their own story in the form of a rock concert.

Highlights: SIX has had an unusual trajectory to Broadway: Edinburgh Fringe Festival to the West End to a US tour to a pandemic hold, and finally, to Broadway. The long road was worth it; Six is fun, fabulous, and feminist - just what we need right now. One of those US tour stops was the Ordway Center in St. Paul, and I was lucky enough to see it two years ago. You can read my full review here; what follows is a condensed and slightly updated version.
The short and brilliantly succinct 75-minute show is so jam-packed with clever wordplay that I'm certain I didn't catch all of it the first time around. But one word sticks out - historemix. SIX is a remix of history; it takes the facts historians have told us about these women, and mixes them up with modern pop culture to give us this new HERstory. Each of the six women is inspired by a modern woman of pop music (most of which I am too pop illiterate to get) as they sing their story in one song to prove that they've suffered the most hardship at the hands of the king and should be declared the Queen of this group of queens. Conveniently there's a nice bit of symmetry in the fates of Henry's wives; as they sing, they were "divorced, beheaded, died, divorced, beheaded, survived." If this competition among women about the tragedies in their lives seems a little uncool, well, let's just say that this show is too clever to fall into that trap, and turns it on its head. While they act like they're competing, these women are actually celebrating and supporting each other.
These six fabulous queens (Adrianna Hicks, Andrea Macasaet, Abby Mueller, Brittney Mack, Samantha Pauly, and Anna Uzele) have been together for years on tour, although I saw two alternates when it played at the Ordway. They are each so talented and showcase that talent in one dynamic number, but are also really strong as an ensemble. Of note, the four-person onstage band is also comprised of all women, and feel like part of the show. It's been a long time coming, but SIX has finally arrived on Broadway at just the right moment, when we need its message of sisterhood, female strength, and taking control of our own stories. This is how we rewrite history to include all of the people and stories that the original writing of it left out.
*Once again, I'm using an abbreviated Fringe-style summary for my NYC 2021 trip, since I am in the greatest city in the world with much more exciting things to do than write! Click here to see all of my Broadway-related blog pos