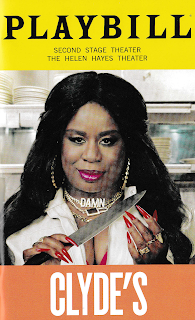 Summary: A sort of sequel to her 2017 Pulitzer Prize-winning play Sweat which explores the post-prison future of one of the characters.

Highlights: This play was commissioned by our very own Guthrie Theater, and premiered there in the summer of 2019 as Floyd's (name change, presumably, to avoid confusion with the story of another Floyd in Minneapolis). This Broadway premiere feels very similar to that production; longtime collaborator of Lynn Nottage, Kate Whoriskey, directed both productions. For both Sweat (which will be produced at the Guthrie next summer) and Clyde's, Lynn and Kate interviewed people in Reading, PA, a town thrust into poverty at the closing of a steel mill in 2008. Sweat deals directly with that issue, and is as devastating as it is true to American life. Clyde's is a bit lighter, perhaps not exactly a comedy, but it focuses more on the healing and moving on of people coming out of prison (including one of the characters from Sweat). You can read my full review of the Guthrie production here; what follows is a snippet of that, plus a few updates.
Clyde's is set in a truck stop sandwich shop (with a realistic set that includes real food being chopped and prepared) that employs people recently released from prison, who might otherwise have a difficult time finding employment. It's run by the tough-talking Clyde, who doesn't treat her employees very kindly, has no time to appreciate a well crafted sandwich, and may be in debt to some bad people. Montrellous is the veteran employee of the group, and something of a sandwich master. Single mother Letitia and recovering drug addict Rafael are joined by new employee Jason, which shakes things up a bit. Each one of these employees has a life story that's only hinted at; we get just a brief glimpse at their lives and how they ended up in prison - anger issues, trying to protect loved ones, or addiction. But it's enough to make them feel like real people, with real problems, hopes, and dreams. Not a lot happens, other than getting to know these complex, fascinating people and their relationships.
The uber talented Uzo Aduba (Orange is the New Black, In Treatment, et al) leads the cast as Clyde, and is so funny, fabulous, and deliciously mean. It's an Uzo we've never seen before, with an attitude as outrageous as her ever-changing trashy-chic wardrobe (designed by Jennifer Moeller). But this is truly an ensemble piece, and this is a great one. Ron Cephas Jones (recently seen on NBC's This is Us) is lovely as Montrellous, and Edmund Donovan, Reza Salazar (reprising his role from the Guthrie production), and Kara Young all bring specificity and humanity to their characters in this funny, surprising, moving, and very human play.
*Once again, I'm using an abbreviated Fringe-style summary for my NYC 2021 trip, since I am in the greatest city in the world with much more exciting things to do than write! Click here to see all of my Broadway-related blog posts.