"School of Rock" by Zephyr Theatre at Lowell Park 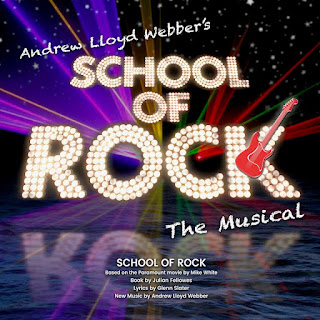 Broadway by the Bridge is back! Zephyr Theatre's pandemic-inspired outdoor summer musical tradition began last year with a super fun Mamma Mia!, and will hopefully continue long past the point where it feels safe to be inside a crowded room. The riverside stage with the gorgeous evening sky and the historic Stillwater bridge as backdrop couldn't be more perfect for outdoor theater, and what's happening on stage is pretty great too. The regional premiere of the Andrew Lloyd Webber/Julian Fellowes musical adaptation of the 2003 Jack Black movie School of Rock features a slew of talented kids, and some pretty great grown-ups too, in this fun and feel-good celebration of music and the way it can bring people together and inspire a sense of confidence, purpose, and self-worth. The bad news is there are only seven performances, and five of them are in the past, so act fast to catch this great new outdoor #TCTheater tradition! (Info and tickets for this Wednesday and Thursday can be found here.)
In case you haven't seen the movie (which I honestly can't remember if I have), here's a plot summary: Wannabe rock star Dewey is down on his luck, fired from the band that he started and his day job, and overdue in paying the rent to his former rock band buddy Ned and his girlfriend Patty (who is unfortunately written as the nagging girlfriend, when she's the only one in sight trying to do any adulting). When he accidentally intercepts a call from Horace Green prep school to Ned offering him a substitute teaching job, Dewey impersonates Ned and takes the job, thinking it'll be easy money (because how hard can teaching a bunch of privileged kids be?). Dewey-as-Ned wants to put the kids on permanent recess, until he discovers they're talented musicians. He soon turns them from classical to rock, and shares his love of rock history, music, and performance. He wants to enter a battle of the bands competition to win some cash and make a name for himself, but soon learns to love the kids, as they love him for believing in them and allowing them to be themselves. As many teachers from Mr. Keating to Mr. Schue have done, Dewey changes the lives of his students, and they have their "Oh Captain, My Captain" moment after the truth is found out, and they come to his defense and sneak away to the battle of the bands. It's here they learn the most important lesson of all: music isn't about winning, it's about sharing the joy and love of music.*
Ostensibly, the star of this show is Reed Sigmund, longtime Children's Theatre company member and Zephyr's Education Programming Director, as Dewey. I cannot think of a better #TCTheater actor to play this role; Reed has the necessary zany energy, childlike playfulness, rock vocals, and physical comedy skills to endear us to Dewey despite his questionable choices. But the best part of his performance is the way he works with the youth cast, letting them shine as the true stars of the show. He treats them like equals, truly listening to them and authentically reacting to whatever they do, in the same way that Dewey does for his students.
If the dozen young actors on stage (some of whom are regulars at CTC and other local theaters) represent the future of #TCTheater, the future looks bright. They're all so in it, having a great time telling this story. Special shout-out to the quadruple threats (act, sing, dance, and play an instrument) - Clay Bartelt on keys, Malia Berg on bass, Sam Mandell on drums, and Huxley Westemeier on guitar. They're really playing throughout the show, and they really rock (with help from the awesome five-person onstage band under music director Phil Kadidlo). Also great are Mabel Weismann as good student turned band manager Summer, and the cutest little irate stylist Truman Bednar. Among the large and talented adult cast (who play a supporting role to the kids), Jen Burleigh-Bentz gives the stuffy school principal depth and almost stops the show with the gorgeous ballad "Where Did the Rock Go?"
The kids are dressed in traditional maroon-colored school uniforms - blazers and plaid skirts - that get a little zhuzhed up for the competition. The multi-level set allows for lots of different exits, entrances, and performance spaces, with desks and other set pieces rolled on and off stage. The lighting is mostly natural when the show begins at 7, but as the sun begins to set in Act II the stage lights come up with a rock concert feel. All of the performers are miked which is at times a little loud, but necessary to overcome the ambient noise of performing in a public park. The kids perform some fierce choreography, especially to the song "Stick It To the Man." (Direction and design by Calyssa Hall and Randal Berger, who also plays Ned; costume design by Jaclyn Mack; lighting design by Norm Tiedeman and FiveR Entertainment; sound design by Bil MacLeslie and Nathaniel Glewwe; choreography by Sheila Cook.)
This is a good week to visit charming riverside Stillwater, with its plentiful shops, restaurants, and outdoor activities, and also see a fantastic regional premiere of a fun and heart-warming musical featuring tons of young local talent.
*Plot summary borrowed from my review of the 2018 Broadway tour.