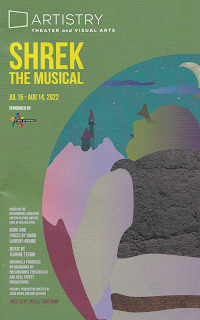 To close out their 2021-2022 season that began with the gorgeous and timely Jason Robert Brown song cycle Songs for a New World, ushering us into the new world of post (mid) pandemic theater, Artistry is bringing us the joyful story of Shrek. This story of a lonely ogre who finds friends, community, and love is a celebration of the beautiful uniqueness of all of us freaks, and it's a really fun time. With a huge cast chock full of local talent; super fun fairy tale costumes; direction by #TCTheater veteran Angela Timberman, a master of making the audience laugh while tugging at their heartstrings; and a catchy score music directed for the last time by Artistry's soon-to-be-retired resident Music Director Anita Ruth, Shrek is a great choice for kids and grown-ups alike (continuing at the Bloomington Center for the Arts through August 14).After being kicked out by his parents at age 7, as is the ogre way, Shrek is living a solo life on his swamp, telling himself he's happy away from the "Big, Bright, Beautiful World." The swamp is soon invaded by a bunch of fairy tale characters, from Pinocchio to the Big Bad Wolf, who were banished from the city of Duloc by the evil Lord Farquaad. Shrek heads to Duloc to try to remedy the situation, and picks up Donkey along the way, his new best friend and a constant source of annoyance. The vertically challenged Farquaad takes the opportunity to send Shrek on a task that he's unwilling to do himself - rescue Princess Fiona from her tower so that he can marry her and become King. Fiona has been waiting all her life for a knight to rescue her, just like in the fairy tales. She's somewhat disappointed when her rescuer is an ogre, but is reassured when they tell her they're taking her to a Lord in a castle. Along the way something unexpected happens - Shrek and Fiona realize they have a lot in common, from their unhappy childhoods (leading to the charming song "I Think I Got You Beat") to their talent in making bodily noises. But secrets, miscommunication, and expectations lead Fiona to go through with the wedding, until Shrek comes to stop it by telling her the truth about his feelings for her and the man she's about to marry. And these two crazy ogres and their wonderfully freakish friends live happily ever after.*

Highlights of Artistry's production include:

Click here for all of the details and ticket information for Shrek, playing Wednesday through Sundays until August 14.