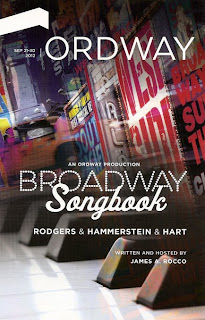 I love the Broadway Songbook series at the Ordway. It's like a college seminar on musical theater history (perhaps like something Rachel would attend at NYADA). The Ordway's Artistic Director James Rocco plays the role of professor, lecturing on the topic and introducing songs (and even singing a little himself). The topic of the first of this season's three sessions is a big one - the popular and prolific musical theater composing teams of Rodgers and Hart and Rodgers and Hammerstein. Rodgers and Hart wrote 28 musicals together, and such memorable songs as "My Funny Valentine," "Blue Moon," and "Bewitched, Bothered, and Bewildered." After Lorenz Hart's struggle with alcoholism and depression tragically got the better of him, Richard Rodgers found a new partner in Oscar Hammerstein. Rodgers (music) and Hammerstein (book and lyrics) went on to write some of the most influential and popular shows in musical theater history, including:


Now that the self-indulgent personal reflections are over (I'm sure everyone has their own personal experiences with these musicals, which is what makes them great), on with the show. In addition to James, five talented local musical theater actors lend their voices to this amazing collection of songs, accompanied by the hardest working musical director in town, Denise Prosek. Joel Liestman has performed in every Broadway Songbook I've seen, and is joined this time by Joshua James Campbell (The Glass Menagerie), Jennifer Eckes (On the Town), Connie Kunkle (who appeared at the Ordway in last year's Japan benefit), and Kirby Trymucha-Duresky (several shows at BCT). The five singers take turns singing alone or together, highlighting many of the composers' biggest hits, as well as lesser known numbers. My favorites include:
My only complaint about this show is that it's too short! It's truly astonishing to contemplate the hundreds of amazing songs that came from the collaboration between these three men. The show could go on for days! But since that's not very practical, this is a nice representative sample of their work. Broadway Songbook: Rodgers & Hammerstein & Hart plays at the Ordway's McKnight Theatre through the end of the month. Check it out if you're interested in a fun and entertaining lesson on three musical theater legends. If you don't already have tickets, call the box office. It's virtually sold out, but they might be able to squeeze you in somewhere. Get your tickets early for the January session, which features the music of Steven Sondheim.