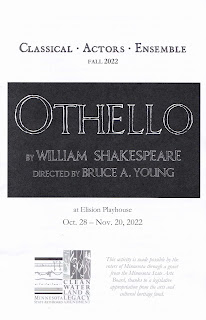 I've enjoyed Classical Actors Ensemble's summer outdoor tradition of Shakespeare in area parks since 2015. But it turns out they also perform indoors. And while their fall indoor production of Othello isn't as fun and playful as their outdoor shows (also, it's Othello), it's still accessible, understandable, and entertaining. Othello is a heavy play, one I'm not as familiar with, and not a short play (i.e., better for me to see a matinee, which I did). But the clear direction and great performances by the cast make the relevant themes of love, betrayal, trust, deception, and manipulation ring out. It continues weekends through November 20, plus a few free readings of other plays (see CAE's website for more info).

Set against the backdrop of the Ottoman-Venetian War in the 16th Century. Othello is a Shakespearean tragedy in which Iago convinces his General Othello that his wife Desdemona is cheating on him with his second-in-command Cassio. By doing so he hopes to assume Cassio's position, or even Othello's. In other words, his motivations are power and greed (something all too familiar in today's world). His plan works, at least in that Othello believes him, resulting in tragedy for Othello and his family, but it doesn't work out so well for Iago either. No happy endings in this one, just a lot of lessons learned too late.
Directed by Bruce A. Young, everyone in the cast (which unfortunately only includes three women) is clear in their portrayals and in their delivery of the Shakespearean language, with no affected accents, but a natural speech. Highlights in the cast include Jamil Lee as a likable Othello, which makes his downfall more painful; Claire Chenoweth as his strong and loyal wife, despite the unfair accusations; and Dominic DeLong-Rodgers as the charming Cassio. But this really is Iago's story, and the rest of the characters are mere pawns in his game. CAE's Producing Artistic Director Joseph Papke shines in the role, rubbing his hands together with glee as he makes his plans, delivering monologues directly to the audience with a devious smile and a devilish twinkle in his eye. He makes Iago a villain you love to hate.
The multi-level, multi-angle, and multi-arch set on Elision Playhouse's intimate stage makes for an impressive backdrop for the story. The action switches from the city of Venice to the island of Cyprus with a change in lighting and some added greenery. The modernish classic costumes, with some Mediterranean influences, feel as if they could be seen in any century, and help to make the story feel more modern and relatable. (Scenic design by Justin Hooper, lighting design by Jake Otto, costume design by Lolly Foy and Molly Smith.)
You don't have to wait for summertime to see Classical Actors Ensemble's brand of accessible and relatable Shakespeare. See Othello now through November 20.