"Sally & Tom" at the Guthrie Theater 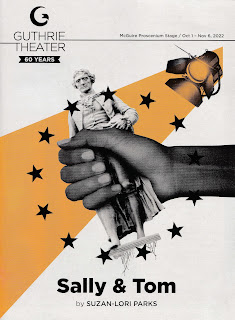 Premiering at the Guthrie this month is a new play by Pulitzer Prize winner Suzan-Lori Parks, in association with The Public Theater (responsible for many ground-breaking shows from Hair to Hamilton). Sally & Tom is not just the story of America's third president Thomas Jefferson and Sally Hemmings, an enslaved woman whom he owned and with whom he had a 30-year relationship and six children. The playwright uses a clever play-within-a-play format to also comment on theater itself, and the role it plays in tackling the big issues of the day. The good news is that Sally & Tom is both highly entertaining and engaging (both the play itself and the play-within-the-play) and provides relevant social commentary, particularly on the legacy of slavery upon which this country was founded, and its repercussions still being felt today. It's a brilliant new play, and we're lucky to see it here first! (Continuing through Nov. 6.)
The play opens with scenes from the soon-to-be-opening play The Pursuit of Happiness by a theater company called Good Company, led by playwright/director couple Luce and Mike, who also play Sally and Tom. Good Company prides itself on actors also performing all of the creative and technical duties (although the actors gripe about it), so when scenes of the play break, we see the actors scurrying around to work on sets, costumes, dramaturgy, or stage management. The company is looking for its big break, a commercial success that will allow them to relax a little after years of struggling in their art. The stress of putting on a show, and finding a producer to finance it, is putting a strain on Luce and Mike's relationship, especially when Mike goes to his ex for money. Real life issues bleed into the issues of the play, in an art-imitates-life-imitates-art sort of way.
What happens to a show when it loses its producer, when an actor drops out, when the founding couple fights? And how does that all relate to the system this country was founded on that allowed some people to own other people, and also sort of be in a family together and maybe even love each other? But what kind of love is it when one person doesn't have a choice? Towards the end of the play, Luce as Sally delivers an amazing monologue about the complicated layers of this relationship 200 years ago that we'll never truly understand, but that fascinates us nonetheless. This historical relationship is the seed that Suzan-Lori Parks uses to tell the story of this modern day theater company as it tries to balance art, commercialism, entertainment, and the responsibility to grapple with the thorny issues.
Director Steve H. Broadnax III and most of the cast are new to #TCTheater; the play had several workshops in NYC. The eight-person cast does an incredible job of playing both the actors and the characters that the actors are playing, making the two sides distinct yet related, and thanks to the direction it's clear when we're in one world or the other. There are some fun moments where we're really getting into The Pursuit of Happiness when it suddenly stops, or little things that let us know this is a play, or dress rehearsal, or casual run-through. Despite the serious subject matter, there are moments of lightness and humor that provide a nice balance.
As Sally/Tom and Luce/Mike, Kristen Ariza and Luke Robertson bring such nuance to their roles, and play all the layers of the theater couple that loves each other but also loves the art that they make, and sometimes disagree about it. Sometimes that bleeds into their performances as Sally and Tom, showing us the parallels and differences between the two relationships. The multi-talented cast also includes Amari Cheatom, Gillian Glasco, Kadeem Ali Harris, Kate Nowlin, and #TCTheater actors Sun Mee Chomet and Daniel Petzold, all of whom make interesting and thoughtful choices about both sets of characters. The whole thing is intricately written and brilliantly played.
The set design is deceptively simple; most of the play takes place on a theater stage, so it looks like a theater stage, with seemingly bare walls (with "e pluribus unum" subtly printed on the back wall). A few set pieces for the play are rolled or lowered into the scene, and a couch or a park bench appears for scenes of the actors away from the theater. The period costumes for the play are lovely, but not too extravagant since this is a production that doesn't have a ton of money. Off stage the actors are dressed sometimes in chic casual wear, sometimes in haggard artist clothes, all very realistic looking. (Set design by Riccardo Hernández, costume design by Emilio Sosa.)
Suzan-Lori Parks's new play succeeds on so many levels, as fun meta theater, as romantic comedy (and tragedy), as historical drama, and as social commentary on where we are and how we got there. The characters feel real and relatable, sometimes likeable, sometimes not so much, and it's fun to watch and root for them as they try to get this show ready for opening night. But we can't get away from this relationship between a rich and powerful White man and the Black woman whom he owned. At the end of the show there's a reveal of the list of names of the people that Thomas Jefferson owned, and it truly brings home the weight of the legacy of slavery that we still live with today. It's no wonder we're so messed up when this was our beginning, but that's why we need art - to hold up a mirror to show us who we are, where we've been, and where we need to go.
Don't miss the fantastic new play Sally & Tom, playing on the Guthrie's proscenium stage through November 6.