"Baltimore is Burning" by Underdog Theatre at SPACE 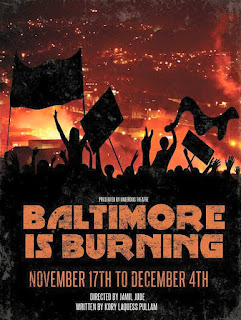 There's another new theater company in town, and they're coming out of the gate with a strong message and a powerful new play. Underdog Theatre hopes to be a voice "for the underserved, the underrepresented, and unheard." Founder Kory LaQuess Pullam, a talented young actor who's made quite an impression on several stages around town in the last few years, has written a great new play about the death of Freddie Gray while in police custody in Baltimore last year. While Baltimore is Burning is about this one specific incident, on a larger scale it's about the many such deaths that have occurred around the country, even right here in Minnesota, and the need to have a conversation about why it's happening and what can be done to change it. At its best, theater brings attention to issues and starts a conversation about them, which is exactly what this play does.

The entire play takes place in the meeting room (in the sparse and intimate SPACE) of the fictional organization Colored People's Advancement Advocates, a grass roots Civil Rights group in Baltimore. Mundane meeting logistics mixed with catching up on gossip soon give way to more serious issues. A few hours ago, Freddie Gray has been thrown into the back of a van, in obvious pain, and nothing has been heard about him since. Two police officers arrive to have a discussion with the leader of the organization (who never shows up) in attempt to ease the people's fears and stop the rioting. The group's VP (Dana Lee Thompson) has a one-on-one conversation with the lieutenant (Andrew Erskine Wheeler), while the rest of the group (Brianna M. Daniels, Joann Oudekerk, JuCoby Johnson, Pedro Juan Fonseca, and Siddeeqah Shabazz) give the other officer (Anna Hickey) a hard time when she claims she's just there to help. The two sides try to come to an understanding, but disagree about the next course of action. The disagreement escalates to an ending so sudden and so shocking that when the lights came up, I thought it was intermission. It was only when the cast came out for the curtain call that I realized that was the end of the play. There's no resolution, only sudden silence, hopefully to be followed by a continuing conversation.

This is a really strong debut for Underdog. Not only does the play tackle important issues, but it does so without cliches or pandering, but rather fleshes out the complexity of the problems in this country that have led to so many black men dying at the hands of police. Even within the organization, members disagree about the best solution - peaceful protest, or destructive rioting? Each character in the play is different, and human, even the cops, as we really see the wide range of people and opinions. Under director Jamil Jude, the cast is wonderful in bringing out the specificities of the characters, the occasional humor, and the brutal intensity. Between scenes we see disturbing actual video of Freddie's arrest and the aftermath, which reminds us we aren't just watching a made-up story, but the horrifying reality.

Just four more performances of Baltimore is Burning remain, with a ticket price of only $10. Check it out for some thoughtful, engaging, powerful, relevant theater by a promising new company.