This is the fifth year of the Twin Cities Horror Festival at the Southern Theater (or so I gather from their TCHFV acronym, unless V stands for Vampires). TCHF is an 11-day festival of theater, film, music, and dance in the horror genre. Not being a fan of this particular genre (I haven't celebrated Halloween since elementary school, and avoid scary movies and TV shows), I've never attended before and didn't think it was something that would interest me. But my friends at Minnesota Theater Love are big fans, so they convinced me to give it a try this year. The structure and schedule is similar to the Minnesota Fringe Festival (hour-long shows with half hour breaks in between), but unlike the Fringe, TCHF happens right in the middle of the busy theater season, so I was only able to spare one day. I picked two companies that I was familiar with, and happily neither show was particularly gory. Below are a few thoughts about each show. I'm still not convinced this is the event for me (much like sadness, I don't do horror), especially with so many other theater choices right now. But it's a fun alternative to the usual theater scene, and if you're a fan of the horror genre, you should definitely check it out. 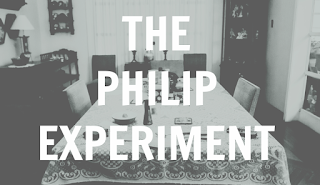 The Philip Experiment by The Importance of Being Fotis
This show is reminiscent of In the Time of Spies, Ferrari McSpeedy's Fringe show this year, with spies and international intrigue and such, but it's less of a comedy spoof and more of a psychological thriller. The experiment involves a fictional character named Philip who has become real. "The Agency" now wants Philip destroyed, and tasks three agents with the job. But they're not quite sure where they are, how they got there, or what's going to happen next. We also see a few warped scenes from the agents' lives before the experiment, and how it all fits together is an intriguing puzzle that I didn't quite fit together, but enjoyed nonetheless. Not being a fan of gore, I was happy not to see any blood, and in fact the cool black, white, and gray color scheme was chilling in its own way. Unfortunately I can't find the credits online and was not given a program, so I can't credit everyone involved, but I did recognize some of the talented cast (Debra Berger, Heather Meyer, Joe Bozic, and Mike Fotis), and I assume some combination thereof is to be credited for writing an engaging, intriguing, chilling, and funny show.

Ubu for President by Four Humors Theater
This show doesn't really fit into the horror genre, except that it's about what happens when a horrible person becomes president, in which case it's the most horrorific show imaginable. #vote. Ubu (Brant Miller) has risen to power thanks to his friends in money (Matt Spring), war (Ryan Lear), and religion (Jason Ballweber). But once he's president, he finds that he does want "the ball" that he promised he never would (insert any number of issues here). And that's all the news can talk about (the show incorporates video clips in a fun and interesting way), no matter how many people he kills. While I usually love Four Humors, I didn't love this show. Their shows are usually so smart and clever, but this one is not up to their usual standards of cleverness. The humor is a bit too crass for my taste (then again, so is this election cycle). Pedophilia jokes wear thin pretty quickly for me, and I'm not sure some of the things they do the American flag are legal. But if you enjoy gross potty humor, and poking fun at every institution in this country, you might enjoy it.

TCHFV continues through this weekend, so there's still time to check out the eerily decorated Southern Theater. To read more about each of the shows, check out Minnesota Theater Love's awesome roundup of not only their reviews, but also other theater writers' reviews. And visit the TCHF website for the full schedule and to purchase tickets.