"A Christmas Story" at Lyric Arts 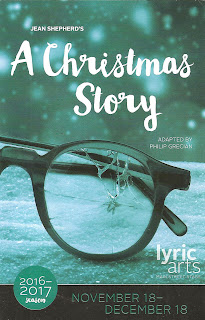 The 1983 movie A Christmas Story has become a holiday classic, thanks in part to TBS running it for 24 hours on Christmas Day every year. Full of humor, nostalgia, and heart, this story of 9-year-old Ralphie and his quest for a very special BB gun for Christmas is a charmer. Fans of the movie are sure to enjoy Lyric Arts production of the play version of the movie, written in 2000 by Philip Grecian (which is different from the musical version that the Ordway did a few years ago). While this story based on a 30-year-old movie based on memories of a time 40 years before that is a bit dated, and viewed a bit differently in today's environment, the heart of the piece is still there. At the Sunday matinee performance some of my fellow Twin Cities Theater Bloggers (from Artfully Engaging, No Filter Reviews, One Girl, Two Cities, and Twin Cities Stages) and I were greeted with a Christmas cocktail, and after the show we chatted with the adult members of the cast and toured the set, with more Christmas cocktails of course. We bloggers always welcome the opportunity to talk to artists about their work and to learn about what happens behind the scenes.* Lyric Arts is one of the top community theaters in town (along with Theatre in the Round), and it was a treat to get to know them a little better and enjoy this festive and fun holiday show.

This play really is meant for people who love the movie, and want to see it come to life before them, so I'll skip the plot summary. You all know about Ralphie and his youthful troubles - being chased by bullies, the dangers of an Indiana winter, being constantly told "you'll shoot your eye you" when asking for the only thing he really wants, getting a C+ on an essay he slaved over for days. The play adds the voiceover narration as a character, a grown-up version of Ralphie telling the stories and wandering through the scenes. The play is quite faithful to the movie and includes all of the sweet and funny little stories about kiddom that we know and love from the movie. With one obvious exception - the final Christmas dinner scene at the Chinese restaurant is not seen, but told to the audience by the narrator. Seeing the family sitting around the table, laughing and being happy to be together despite the circumstances, is much more effective than someone telling us about it, which loses some of the heartwarming effect of the ending.

Lyric Arts continues to impress with their elaborate sets (designed by Brian Proball) and great use of vertical space. Ralphie's home is replicated in intricate detail, including a kitchen with vintage food props and Ralphie's upstairs bedroom. Large set pieces including a huge Santa slide, a schoolroom chalkboard, and living room furniture are wheeled in and out from the tiny backstage storage space. But this is where the sets may have been too elaborate for the story; moving the set pieces in and out creates lengthy scene transitions which bog down the momentum of the story. The play, like the movie, is essentially a series of vignettes strung together, which are better absorbed in quick succession to build the overall effect of the memories. Although the set is cool, a simpler set would allow the story to be told more tightly.

The ensemble of four adults and seven children does a great job bringing the story to life, including gamely jumping in to Ralphie's overly dramatic fantasies. Clinton Kish-Bailey is a great Ralphie, portraying all of the angst, drama, and awkwardness of being a kid. Huxley Westemeier has few lines as his kid brother, but steals scenes with his oatmeal flinging, constant hiding, and troubles with the winter gear. All of the kids in the ensemble are having great fun, which makes them fun to watch, and Alec Fisher as the bully Farkas is a dead ringer for his movie counterpart. The adults hold their own amongst these talented kids. Bill Williamson displays some great physical comedy as the bumbling father, and Shana Eisenberg as the mother provides a nice balance as the straight man to her husband's antics (a particularly effective scene involves mom repeatedly turning the leg lamp off without dad knowing what's happening, an intricately choreographed pantomime). Nick Menzhuber is an affable narrator, and Gina Sauer gets to play several different sides to the teacher Miss Shields. Costume designer Samantha Kuhn Staneart has dressed the cast in clothes very reminiscent of the movie.

While I still love the movie, I forget how dated it is. It's a little harder to laugh at kids getting bullied today when we know the short and long term effects of bullying. And things like the strictly defined gender roles, lack of diversity in the characters (and the cast), and the idea of children playing with guns make the story feel quite dated and a bit uncomfortable at times. A Christmas Story is about nostalgia for our youth when times were simpler, when all we had to worry about were completing that essay for school and what we got for Christmas, even if through out child's perspective we couldn't see that those times weren't so great for a lot of people.

One thing that overwhelmingly came through in chatting with the cast after the show is how great everyone at Lyric Arts is to work with (I concur), and how hard everyone works (often unpaid) to bring a show to life for the audience. That's at the heart of community theater, and Lyric Arts is one of the good ones. A Christmas Story continues through December 18, in rep with Saturday matinees of  'Twas the Night Before Christmas, a "mainly for kids" production. Check them out for some family holiday entertainment.