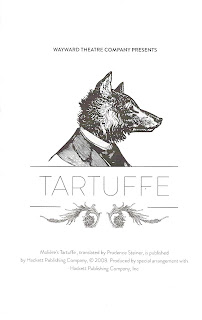 I love seeing theater in non-traditional theater spaces; it shakes me out of the usual and allows me to see theater in a different way. These days, it's becoming a necessity for the many nomadic theater companies in town to look outside the box when planning to mount a show (see also Frank Theatre's Good Person of Setzuan in an abandoned Rainbow Foods). Happily, the James J. Hill House seems to be quite amenable to hosting theatrical events; I've seen three plays there in the last six months. It's a gorgeous and historic building, and lends itself quite well to a variety of projects, from a comic opera like Marriage of Figaro, to a creepy horror tale like Bluebeard's Dollhouse, to a 17th Century French comedy. The latter can currently be seen in the grand surroundings on St. Paul's Summit Avenue (once the home of more millionaires than any other street in the country), in the form of new-to-me Wayward Theatre Company's innovatively imagined and well-executed Tartuffe. I can't help thinking the Hill family would be thrilled to know people are experiencing wonderful theater in their home.

French playwright Moliere's most famous comedy Tartuffe, despite being 350 years old, is a fairly straight-forward, easy to understand, and relatable story. Perhaps it's the 2008 translation by Prudence Steiner, but the language and situations feel modern and not entirely foreign. Except for the fact that it's about a wealthy family with servants, which not too many of us are familiar with, but which makes the James J. Hill House the perfect setting. Orgon (Leif Jurgensen) and his Dowager-like mother (Julie Hutchison Driver Bolton) have fallen under the spell of a hypocritical con man named Tartuffe (Tim McVean), much to the rest of the family's dismany. Orgon loves and trusts Tartuffe above all else, and cannot see that his claims of piety are a cover for his dastardly ways. Orgon wants to marry his daughter Mariane (Amy Vickroy) to Tartuffe, despite the fact that she loves and is already promised to Valere (Avi Aharoni). Orgon's son Damis (Brandon Ewald), his wife Elmire (Sarah Nargang), her brother Cleante (Lucas Gerstner), and Mariane's maid Dorine (Samantha V. Papke) plot to reveal Tartuffe's true colors to Orgon. Observing that Tartuffe is in love with Elmire, they plan a scene for Orgon to observe the scoundrel in action. Alas, Orgon has already signed his home and fortune over to his former favorite adopted son. Is it too late for the family to triumph, or will the hypocrite win? #vote

The play takes place entirely on the first floor of the mansion, so no need to worry about climbing stairs. In the first act we follow the family from the great hall (with its majestic staircase) to the dining room and back, being ushered sternly by servants. The second act begins in the art gallery (which is currently displaying what looks like a fascinating exhibit about Eugene McCarthy and the 1968 presidential campaign), and concludes back in the great hall. It truly feels like we're eavesdropping on the family drama as we follow them from scene to scene.

There really is not a weak link in the cast, everyone is in the moment and interesting to watch, down to the last maid. The simple and elegant costumes include the interesting choice to put the women in pants, under beautiful brocade jackets. Despite my love of dresses I quite like seeing 17th Century women dressed in pants, giving it a more modern feel and elevating them to equals of their male counterparts (costume design by Sarah French). A few charming musical touches are sprinkled in, including solo cello and a capella versions of the Beach Boy's "God Only Knows" and "Amazing Grace."

Tartuffe continues through November 20. With a sliding scale fee from $15 to $30 and free street parking, it's a great deal for visiting this historic mansion (which never gets old no matter how many times I see it) and experiencing some great site-specific theater. Visit Wayward Theatre Company's website for more information and to purchase tickets.