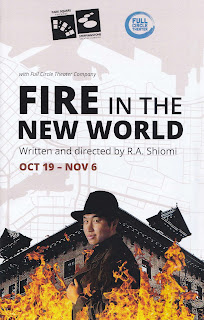 Rick Shiomi, founder of Theater Mu and current co-Artistic Director of Full Circle Theater Company, returns to the Japanese-Canadian noir detective world of post-WW II Vancouver in his new play Fire in the New World. The first play in what is now a trilogy, Yellow Fever, is set in 1973 and premiered in 1982, and was produced by Mu in 2013 as part of Rick's last season as Artistic Director. It was followed by the prequel Rosie's Cafe, set in 1951. Fire in the New World takes place between these two, in 1963, but don't worry if you haven't seen the other plays, it stands on its own (although it would be great fun to see the three plays in rep). Once again, private eye Sam Shikaze battles crime, gentrification, and racism with the help of his friends. See it at Park Square Theatre through November 6.
Sam Shikaze (Gregory Yang) and his partner Jonathan Webster (Brian Joyce) have offices in the New World hotel, which is in danger of being bought out by a wealthy developer. Roderic Alexander (Joe Allen) wants to tear down Powell Street for development, destroying the Japanese-Canadian neighborhood, which already took a blow from the internment camps of WWII, in which 90% of Japanese Canadians were incarcerated (for more on that, read the great dramaturgical notes in the program, and online). Alexander the last person Sam expects to see show up on his doorstop, but he does, and asks for Sam's help finding his missing Japanese wife Yumiko (Anna Hashizume). Sam reluctantly agrees to take the case, but soon finds out that this is not just a simple missing persons case. Yumiko visits Sam and tells him she doesn't want to be found, but works with him while in hiding to get to the bottom of a mysterious fire and some missing money. Sam's frenemy Detective Kadota (Keivin Van) also gets involved, as does his friend Rosie (Alice McGlave) who runs the neighborhood cafe. In solving the case (which ends in an intense battle of guns and wits) Sam and Yumiko form a connection, but she's moving on, and Sam's staying on Powell Street to continue in his work.
Playwright Rick Shiomi also directs the play, and achieves that perfect unhurried world-weary noir tone. Sam delivers several explanatory monologues directly to the audience, letting us in to what he's thinking, nicely delivered by Gregory. The set and lighting also contribute to that noir feel, sort of dark and dingy. At the center of the stage, on an angle, is Sam's office, with Rosie's Cafe on one side and an alley on the other. Lighting directs us to which space to watch, and creates that moody noir feeling. Characters are dressed in period clothing, suits and trench coats, and a smart pantsuit for Yumiko, which I appreciate because it makes her a little smarter and deeper (she's a lawyer) than the typical femme fatale character. (Set design by Joe Stanley, lighting design by Karin Olson, costume design by Khamphian Vang.)
(Re)visit the intriguing and amusing noir world of Japanese-Canadian private eye Sam Shikaze at Park Square Theater in downtown St. Paul through November 6.