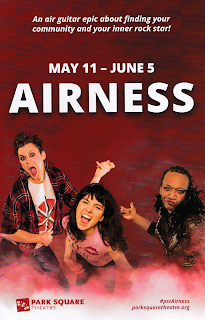 Park Square Theatre finally returns from their extended intermission with a really fun and feel-good play about a national air guitar competition. It sound ridiculous, but truth is stranger than fiction - this is actually a real thing. LA-based playwright Chelsea Marcantel has set Airness within this world where people travel the country to compete with 60 seconds of playing an imaginary guitar. But like any story, it's not really about air guitar; air guitar is the backdrop against which is set this sweet and funny story of community, friendship, finding your people, and pursuing your passion. The fantastic cast embodies this lovable group of oddballs so well that you find yourself rooting for them and becoming invested in their story. With the stage appeal of a rock concert and the heart of a chosen family story, Airness is a great welcome back for Park Square (continuing through June 5).

The hero of our story is Nina (Julia Valen), through whom we enter the world of air guitar. She's a real guitar player, and when her real boyfriend breaks up with her, which breaks up their real band, she wants real revenge. Since he's the reigning air guitar champion, known as "D Vicious" (Eric "Pogi" Sumangil), she decides to join the competition and take that title away from. But she has a lot to learn about air guitar, which she does through a friendship with some regular competitors - good guy "Shreddy Eddy" (Neal Skoy), eccentric "Golden Thunder" (Michael Terrell Brown), hippie "Facebender" (Daniel Petzold), and rare female competitor "Cannibal Queen" (Shae Palic). We follow this group across the country as they compete in regional qualifiers, and happily all of our characters make it to the finals. There's lots of personal drama and self-discovery along the way, and what started out as simple revenge for Nina becomes an honest and heart-felt quest for something more.

One of the qualities the competitors are judged on is the elusive "airness," which sounds a little like samahdi from the yogic tradition - transcending the moment to find absolute connection - with the song, with your true self, with the audience, with the imaginary guitar. The fun part of this play is that we get to see each of the characters perform a 60-second air guitar piece (or two), and they really go for airness, maybe even achieving it. Each of them has a unique style to their playing that matches the character's personality. Director Angela Timberman (who knows more than a little about combining humor with heart) is also listed as the choreographer, so we can credit her and these talented performers for these incredible air guitar performances. I'm not sure if they're good enough to win a national championship, but I can't imagine anyone doing it much better than this group.We jump around to a different city in almost every scene, with iconic views from each place displayed on the brick wall at the back of the stage. Most of the scenes take place in green rooms, which I imagine as a back room at a grungy bar, represented by a few set pieces rolled on and off stage by in-character stagehands. Costumes immediately tell us who these characters are - from Golden Thunder's fringe and feathers, to Cannibal Queen's leather pants, to Facebender's bellbottoms. During the air guitar performances bright colored lights flash around the theater as 60 seconds of a usually familiar song plays. It's a great technical feat to make all of this work together in a way that feels like we're actually at the competition. (Set design by MJ Leffler, costume design by Ash M. Kaun, sound design by Eric M.C. Gonzalez, lighting design by Alex Clark, projection design by Kathy Maxwell.)

You can see the fun, funny, heart-warming, rockin' Airness through June 5 at Park Square Theatre in downtown St. Paul. They'll close out this brief season with their usual summer mystery - a Sherlock Holmes play by prolific and hilarious local playwright Jeffrey Hatcher. Looking ahead to the fall, their recently announced first full season post-covid looks fabulous, including the regional premiere of the 2016 Tony-winning best play The Humans, a play by America's current favorite playwright Lauren Gunderson, a Pulitzer Prize-winner, and more. Park Square has gone through some changes in leadership over the last few years, and is now being led by a group of Artistic Associates. I'm excited for this new chapter, and Airness is a great way to begin it.